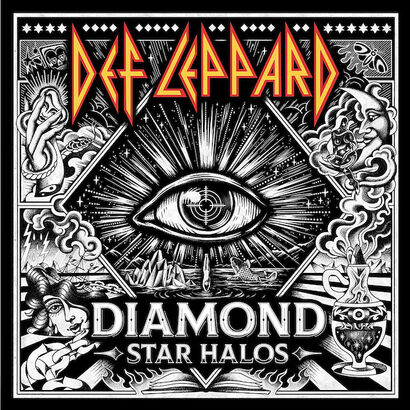 Comprised of 15 songs, Def Leppard’s 12th studio album takes its title from a lyric in T. Rex’s “Bang A Gong (Get It On)”, specifically, “You’ve got a hub cap diamond star halo.” That’s also the main musical direction here, early ‘70s rock, especially David Bowie, Mott The Hoople, and the aforementioned T. Rex. Opening track “Take What You Want” is a solid rock song, unmistakably Def Leppard, and one of the best on offer. “SOS Emergency” is equally strong with its uplifting, radio friendly vibe. First single “Kick” is full of swagger and strut, and although vocalist Joe Elliott’s declaration that “Fire It Up” is “an arena anthem” is somewhat of an exaggeration, it is reminiscent of “Rocket” from Hysteria.

Bluegrass-country star, and multiple Grammy Award winner Alison Krauss appears on a pair of songs. Although it’s adult contemporary / soft rock in nature, “Lifeless” is by far the better of the two as “This Guitar” is a mushy ballad that’s completely out of place. The other guest musician on Diamond Star Halos is David Bowie’s pianist Mike Garson, who also lends his talents to two songs. “Angels (Can’t Help You Now)” is a well constructed, almost epic ballad. Conversely, “Goodbye For Good This Time” is overtly orchestral, sounding more at home on a Hollywood movie soundtrack, as opposed to a rock ‘n roll record.

The rest of Diamond Star Halos isn’t nearly as remarkable. “Liquid Dust” is dreary and over-produced with the unnecessary inclusion of strings. “U Rok Mi” hinges on an effective bass groove, and there’s some interesting guitar work thrown in for good measure, yet lyrically the chorus is underwhelming. “All We Need” is poppy and pedestrian, “Open Your Eyes” and “Unbreakable” are both forgettable, with “Gimmie A Kiss” coming across as commercial and contrived. Closing track “From Here To Eternity” is the longest song on the album at five and a half minutes, and ultimately serves as an anti-climactic ending.