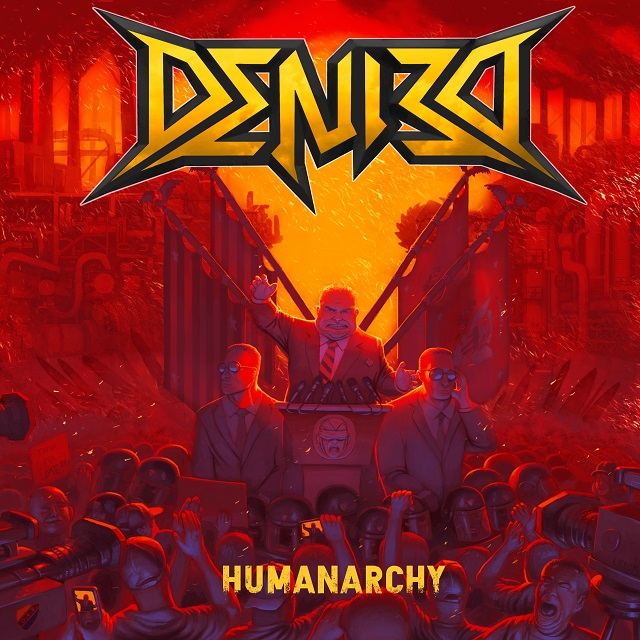 A seasoned metalhead would guess by the album title and cover art that Denied’s Humanarchy is a slice of thrash metal, but the Swedes’ new album displays numerous influences, rather than a full-on thrash attack. The band’s sixth album, guitarist Andy Carlsson remains the sole original member since their inception in 2003 with second guitarist Chris Vowden in tow since 2009 and the rhythm section of Fredrik Thörnblom (bass), Markus Kask (drums) and former Artillery vocalist Søren Adamsen all entering the fold in the last 5 years.

The production is crisp with a modern punch although the bass could have used more “oomph!” The soloing is spectacularly melodic rather than showing insane speed furiously ripping through notes. Those familiar with Adamsen’s voice know he has a diverse range, kind of similar to Ralf Scheepers and his vocals spit out aggression on “Divided” and the forceful “Flesh Made God” while they soar on the Iced Earth, Nevermore type ballad “Don’t Cross That Line”.

There is a mish-mash of everything on Humanarchy with opener “Divided” sporting Exodus type stomping thrash, but then “Death By A 1000 Cuts” introduces keys with a commercial appeal that sounds like a song Dynazty would write. It’s undeniably catchy and well-written but a bit jarring going from the intense opener to it and then following up with the mid-tempo and angry title track.

Longest cut “Maintenance Of Insanity” is an atmospheric slow burn with thunderous chorus and stands out as a highlight as well as the catchiness of the Judas Priest like “Ten Ton Hammer Of Pain”. Eight songs and 41 minutes is the perfect length and while a couple more up-tempos scorchers would have been preferred, Humanarchy is a solid slice of thrashy heavy metal.