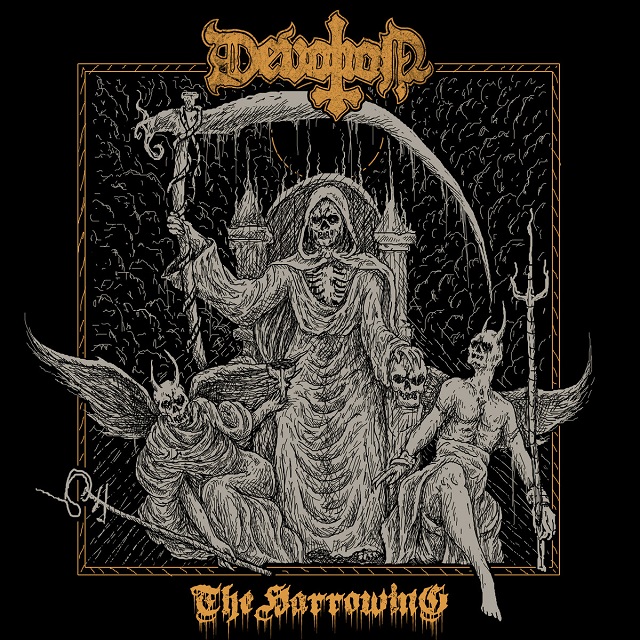 The Harrowing follows up this Spanish death metal band's 2016 debut, the subtly titled Necrophiliac Cults, and Devotion has taken the time to craft an impressive piece of mainly sludgy death metal that is both primitive and thoughtful here. The former due to the caveman pummel and attack of songs like the awesome “God Forlorn”, which takes us down below but not quite to the caves, and gets us grimy but not totally covered in filth.

Meanwhile, the “thoughtful” aspect of this comes from the way the album is separated into “chants” (you know them as “songs”) and “dirges” (you know them as “the boring interludes you can't be bothered to skip over”). But, despite my exhaustion at such things, this is done pretty well, Devotion using songs... uh, chants like the classic old-school death metal stomp “Birth Of Horror” or the incredibly heavy sludge-DM reckoning “Virtue Besmirched” to hammer us hard with their sluggish, barbaric DM then giving us moments of breathing room... uh, fine, dirges to catch our breath throughout this only-kinda-tiring 48-minute release (honestly, the dirges come and go, in one ear and out the other, over before I even have a chance to really notice them). Not bad at all, and while that all might sound a bit fancy, eh, just crank up their sluggish death metal and enjoy the satisfying sounds of ultra-heavy extremity, not much in the ways of frills, really, and cooked up just right.