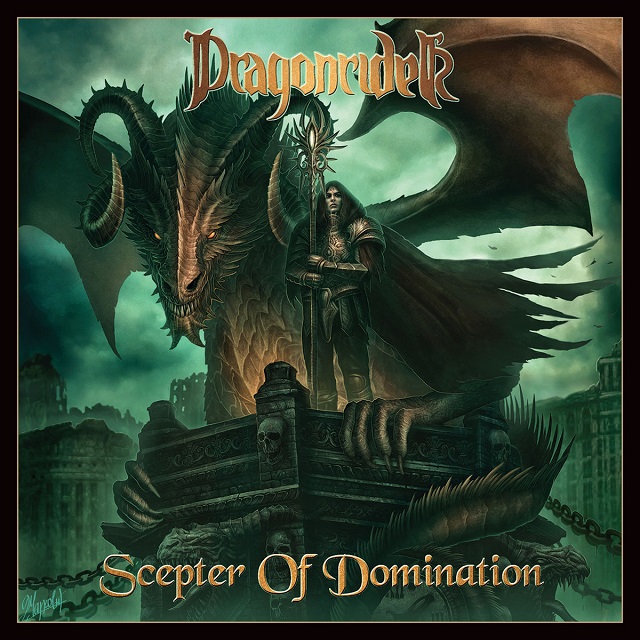 Better late than never... Almost twenty years ago, guitarist Rad McDadi (who also played drums and bass for this recording) founded a band going by the name Valderia in the unlikely metallic "hotbed "of Amman, Jordan. In '07 he rechristened the outfit Dragonrider and by '14, wisely opted for a move to Bremen, Germany. FINALLY, here's the nine track debut! What a long strange trip it's been.

63 second "Melody Of Light" intro includes a whinnying equine, echoing voiceover and dual guitars, one acoustic, one electric) setting the table for what will follow: speedy riffs, high pitched vocals in a traditional/power metal context. Falsetto wail greets "Where Lightning Forever Strikes", which gallops like the aforementioned steed. The title track is simple, straight ahead traditional metal. Only "Below The Stars" possesses a similar vibe.

"Lone Rider" and "Master Of Thunder" (back-to-back in the running order) were previously released (together), two years ago. The former is a rollicking meat and potatoes number, devoid of the audio frills of its surroundings. The other, more of a plodding (uninspired weak link of the batch), mid-tempo construct, although both offer a piercing, upper register workout for Michalis Rinakakis. An instrumental follows: "Call Of The Crimson Moon", with a bit of clanging swords and audible horses in its midst. "Grand Finale (We Fly)" tries to be a grandiose wrap-up, Broadway style. An alternate, "extended version" of "The Berserker" rounds out the offerings, 55 seconds longer than the earlier rendition, much of the extra time courtesy of an intro and concluding, lone piano coda.

Laudable vision and perseverance, but not first division stuff, yet.