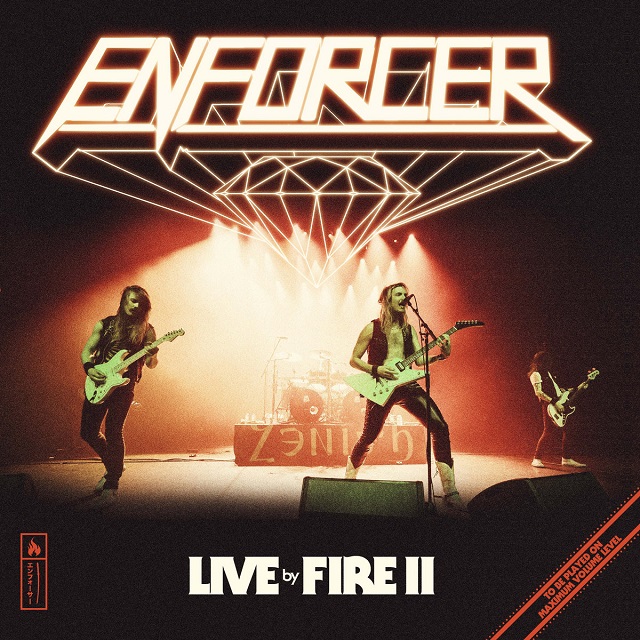 Following the release of 2015's From Beyond, the Swedish upstarts seemed poised for the loftiest heights. On its heels came the initial live opus, to not only satisfy those who'd yet to see the band in concert (i.e. North American fans), but solidifying their reputation as an incendiary act. They spent the better part of two pre-pandemic years touring and preparing the globally anticipated follow-up. Zenith ('19) threw a bit of a spanner in the works, showcasing slower tempos and demonstrating musicianship/songwriting over the fly-by-the-seat-of-your-pants ethos that had characterized (and endeared Enforcer to so many), to that point in their career. True, there was that classical piano introduced "Speak The Tongue Of Heathen Gods" bonus track, tacked onto the end of the first live disc, but that was (thought to be, at the time) a one-off, not indicative of the "new direction" heralded on the next studio effort.

The virus killed much of the momentum planned by legwork for the Zenith touring cycle. So knowing their strengths lay in front of an audience, Enforcer opted to bide their time (make a few bob, along the way, and smooth over any residual ruffled feathers) via a second live disc, imaginatively entitled Live By Fire II. Like the ambitious 54 date, cross-continental trek, undertaken two years ago, Fire II sprinkles four Zenith "highlights" amongst the old, speed metal ragers (while aired in Mexico City, "Sail On" thankfully ended up on the cutting room floor). Although the original Fire came packaged with a DVD (filmed in Tokyo, although the audio portion/CD was from Greece, earlier in '13), the current offering contains more onstage material.

While lackluster newbie "Die For The Devil" was the European set opener (on this disc as well), it was wisely switched for the proven winner "Destroyer" (available elsewhere on the Mexico City show) throughout the US tour. Need to kick-off with some energy! Had a bit of a hard time wrapping my head around Zenith (even the live counterparts, which STILL stuck out like a sore thumb), but it won't detract from listening to (or attending, when allowed/available) a frenetic paced career retrospective, even with drum and guitar solos intact. "Searching For You", a speedster, albeit in possession of a poppy chorus, makes it back-to-back Zenith tracks, kicking off the Mexican night. Always loved Olof Wikstrand's, unrehearsed/off-the-cuff (and hilarious) stage banter. Sadly, that's kept to a minimum this time around.

A triple dose of vintage (read: pre-Zenith) music segues seamlessly from break-neck "Undying Evil", through crowd sung (even the opening guitar notes!) "From Beyond" to screeching vocal punctuated "Death Rides This Night", complete with pre-recorded "Bells Of Hades" instrumental intro. Wikstrand's piercing higher register is readily apparent on the mid-tempo "Zenith Of The Black Sun". On a big stage, apart from a chance to catch their collective breath, good for a sea of fist thrusting fans and some synchronized stage moves.

Can recall years ago at a German festival, Olof racing around the stage and literally out-of-breath, just a few songs into the set. At that time, he was only the vocalist, not doubling on guitar. Then again, dare only the heartiest headbangers to attempt to keep pace with blinding "Live For The Night" (one of the few non-Zenith tracks that did NOT appear on the initial live go-round. "Mesmerized By Fire" may be a reprise, but necessary in any/every Enforcer set. If the former owes a debt to sped up "Shoot Out The Lights" (Diamond Head) then the later could be a lost Leathur Records era Motley Crue tune.

Just passed the midway point, the sequencing sort of bogs down, visions of stadium headliner bloat infiltrating a searing club band mentality, what with a fourth Zenith selection (within the first nine numbers?), followed by the aforementioned solos sandwiching “Scream Of The Savage". Guess in the vinyl age, they could have let the guitar spotlight (aka "City Lights Jam") close the B-side of the first record, then begin Side A, of album #2, with "Savage", but in the digital stream era (or in-person), it's too much consecutive "filler" in a short space. From there on out, it's all guns blazing, beginning with drum bashing "Run For Your Life".

Like more established acts, the end of the concert is pretty scripted, certain songs saved for the finale/encore. In this case, it's a no-holds-barred, noggin' rattling speed fest. Hope that never changes! A call and response rendition of "Take Me Out Of This Nightmare" ends the proper set, begun in near falsetto, the eager Mexican crowd offering the titular chorus, without any coaxing. "Destroyer" is aired when the band returns to the stage, a position demonstrating its prominence and why it played so well as an introduction to North American concert-goers. It gets the party started, be it first thing, or as the encore re-introduction. Prior to "Katana", the singer typically offers a humorous/memorable spoken-word intro. This time is no exception. As always, "Midnight Vice" brings the show to a close.

Reservations aside, damn I miss the sweat and energy of live events. Hope it's not too much longer before they return. In the meantime, this helps.