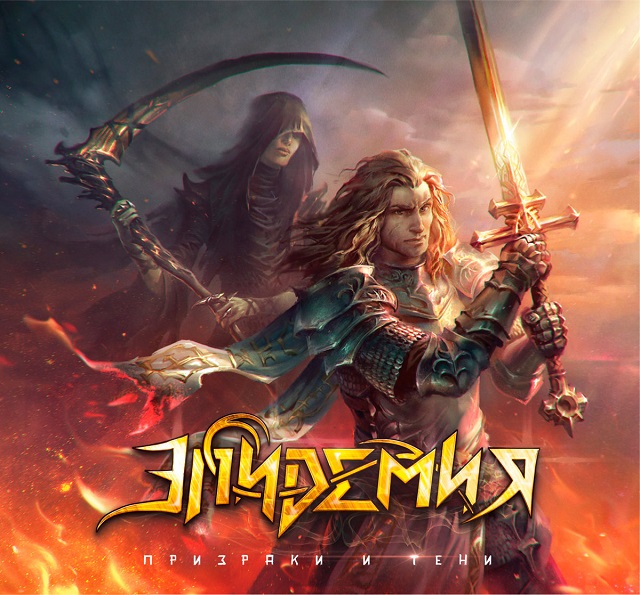 This is the heretofore unknown band's eleventh studio platter (alongside a pair of live outings) and 2021 marks their 25th anniversary. The Russian power metal outfit translates to Epidemia and the name of the album is Ghosts And Shadows. A somewhat timely moniker and perhaps that's why we're hearing from them, NOW. Hidden behind the deteriorating Iron Curtain, all this time, Western discovery undoubtedly has been hampered by the Muscovites singing in their native tongue. This go round, the inspiration is literary works, mostly science fiction/fantasy tomes. Musically, they've adopted a sound similar to their continental counterparts (albeit lacking much of the punch/crunch), residing somewhere between the mid-paced dynamics of Nightwish and the Italian power metal camp.

Bouncy and lively (a bit of music box melody within the mix), "Последние врата/ The Last Gate" is based on the book series The Gate of Death, by authors Margaret Weis and Tracy Hickman, also responsible for the Dragonlance series. Letting the words float by, they don't sound too different from Italian or Spanish, to the untrained ear. "Паладин/Paladin" (the Anglo title clearly heard within the chorus) dispenses with the Teutonic rhythms, in favor of a progressive (more keyboards, less aggro) approach. "Тёмный рыцарь/The Dark Knight" is catchy, with gang vocal chorus, while thunderclaps and Russian voiceover introduce speedy "Тор и Рагнарёк/Thor and Ragnarok". ‘80s pop tinkling of ivories greets "Письмо Ведьмаку/Letter to the Witcher", the least metallic inclusion. The opening bass groove to "Корум (Серебряная рука/Corum (Silver Hand)" owes a debt to Metallica's Black album. Corum is one incarnation of Michael Moorcock's Eternal Warrior, destined to fight the Chaos Lords. Built around a backbone of symphonic strings and piano, "Пустошь Смауга/Desolation of Smaug" is the lone full blown ballad. An energetic guitar/keyboard workout, the title cut closes out the nine compositions on an upbeat note.

Interesting peek behind the Curtain, to see how the other half lives/plays.