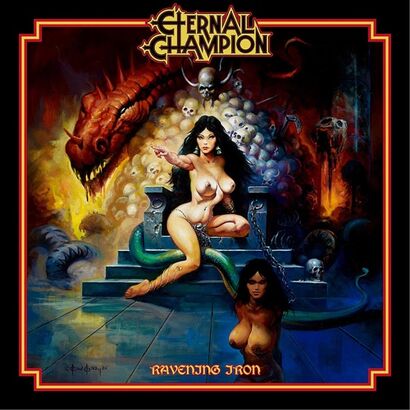 Epic heavy metal to the core, Texas’ Eternal Champion reminds of veterans Cirith Ungol, Manilla Road, and Omen as well as newer act Visigoth. In what seemed like an impossible task, Eternal Champion have managed to build upon their 2016 debut, The Armor Of Ire, and absolutely crush it with the follow-up, Ravening Iron. It’s Conan The Barbarian metal, and the band clearly gives no f’s with that cover art (drawn by Ken Kelley, responsible for KISS’ Destroyer and Love Gun as well as Rainbow’s Rising).

The riffs to opener “A Face In The Glare” and “Worms Of The Earth” are face-melting; many bands wish they were capable of full, stick-in-the-mind type riffing. The choruses have been heightened and the addition of the synth provides a comfortable layer to the overall sound. Jason Tarpey’s echoed vocals are the perfect backdrop to the mammoth guitars and steep soloing. Even the short, synth-backed instrumental, “The Godblade”, doesn’t sound out of place. It acts like the warrior entering the arena for closer “Banners Of Arhai”, which rumbles in with a crawling guitar lead and death march rhythm. The way Tarpey screams “now die!” near the conclusion of the track is chilling to the bone. “Skullseeker” ravages with adept drumming and a thumping rhythm closely resembling doom metal, while “Coward’s Keep” churns a ‘70s type, groovy guitar lead before exploding to a full-on stomper. There’s a great deal of variety, superb sonic quality, and with grade A performances all-around, Ravening Iron is a tight 37-minutes and should see itself near the top of album lists for 2020.