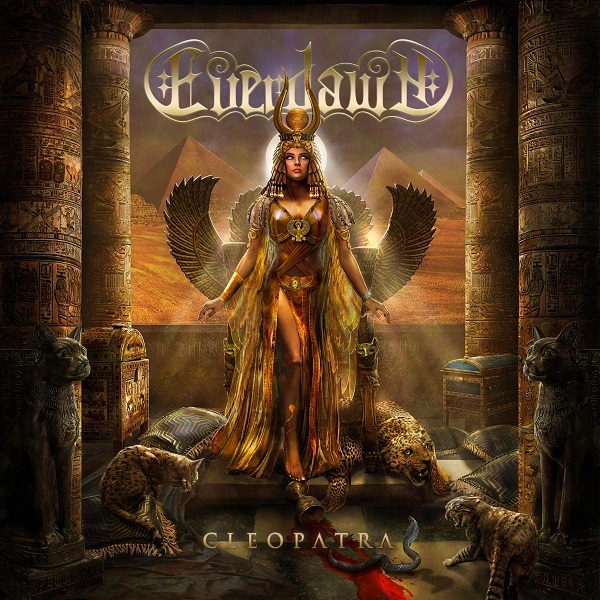 Riddle: How many bands can Symphony X bassist Mike LePond be in, at one time? He has now joined up with fellow New Jersey residents Everdawn (formerly known as Midnight Eternal, a moniker under which the eponymous debut was issued via the Inner Wound label in '16). Joining LePond as a new recruit is singer Alina Gavrilenko, hence the re-christening for outing #2, for a concept album surrounding the titular Egyptian queen. Musically, they fall within the Beauty & the Beast genre: trilling operatic female vocalist accompanied by keyboard/synthesized symphonic strings-laden, bombastic power metal.

While many like-minded acts name-check Nightwish as a selling point in promo literature (why not align oneself with the penultimate band, regardless of validity?) have found few who are able to replicate the Tarja Turunen stylings. Apart from similar titles and spoken narration ("Ghost Shadow Requiem", heck, even the band name recalls a Tuomas Holopainen creation, "Everdream") Everdawn have mastered the sonic template. If required to select the song that comes closest to the Finnish masters, would be "Heart Of A Lion", which also features the most prominent guitar contribution. Ends with a cappella high note.

The title track appears third in the running order, complete with fleet-fingered scales and hammer-ons. "Your Majesty Sadness" sees a male voice in duet with Gavrilenko (courtesy of Therion contributor Thomas Vikström, with whom these guys played some shows, previously). "Lucid Dream" is a full-on gallop, digits bouncing off the ivories and fretboard alike. Speaking of musicianship, "Toledo 712 A.D." is a sped-up, classical music inspired instrumental, while the more restrained "The Last Eden" finale sees the vocals double-tracked.

Really had a hankering for this sound, in the early years of the millennium, prior to over-saturation. That said, Everdream scratch that itch.