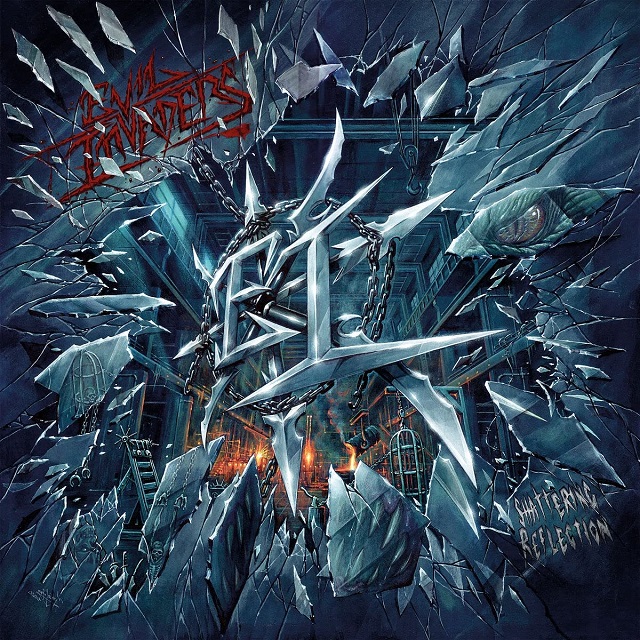 The Belgian thrashers are precisely the type of band that was most hurt by the multi-year pandemic layoff. After a summer of high-profile European festival appearances, the band was poised to support the Surge Of Insanity live CD/DVD with their own headlining tour. Then Covid-19 hit and canceled everything. Now the Invaders will hope to make up for lost time and re-establish themselves, albeit under the tsunami of reactivated metal acts, established and (like themselves) relatively new. At least they got out of the starting gate a bit early, with this first quarter 2022 release.

"Hissing Crescendo" leaps from the speakers as a modern day update to the Halford solo material, circa Resurrection (especially said titular cut). However, no one will mistake Joe's shrieks and squeals for the Metal God. Energetic start though! Follow-up "Die For Me" begins more restrained, but settles into a traditional metal beat, with singable chorus. Speaking of restrained, video single "In Deepest Black", could be classified an Invaders' ballad, as Joe's tortured throat smoothes over the lyrics (apart from the odd histrionics). It belies their thrash/speed metal roots. Same can't be said of the blazing pounder "Sledgehammer Justice", the vocalist wailing away as if two pairs of hands are attempting to strangle him. Gritty, stop-start guitar riffing, come the mid-section there's a lilting gallop, before the tempo accelerates back to frenetic.

Can't help but get another Judas Priest flashback, as short (3:33) "Forgotten Memories" commences. Once more, the tempos are held in check, mid-paced traditional metal. "Realm Of Shadows" is a 69 second intro to the belabored, heavy plod of "Eternal Darkness". Ninety seconds into its 6:32 length (the longest track of the ten song running order), it suddenly becomes aggressive, in a mid-‘80s American crossover sort of way. Nice melodic gallop in the final third too. "My World" see Joe employ a spoken word delivery, part Phil Rind (Sacred Reich), part Alice Cooper. Come the halfway point, subtleties are dispensed with, in favor of sonic blast, albeit with an unsettling, off-kilter subtext. Solo, echoing bass notes introduce "Aeon", a full-blown instrumental. Ethereal disc closer "Circle" takes a meandering route, before getting down to the task at hand, yet never full commits to the speed quotient. A hodgepodge of ideas run throughout this quirky finale, which could really only be slotted last in the running order.

Given it has been almost five years since the last studio platter, eight "real" tunes is a bit thin. That said, the fast parts are as chaotic as ever and the (heretofore unheard) moments of clarity add a new/welcome dimension to the mix. Now let’s see about some North American exposure!