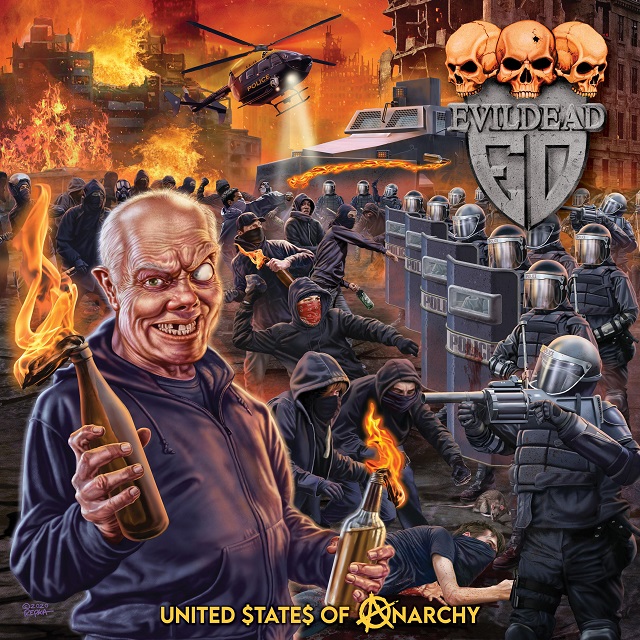 Chaos reigns with Evildead’s return United States Of Anarchy. Their first full-length since ’91s The Underworld, the album was spearheaded by the band’s second reunion in 2016. Evildead pulls no punches with a straight ahead, in-your-face thrash attack filled with statements about the corruption of politics, the news media, and society in general.

Singer Phil Flores is as feisty as ever, barking out vocals like a military officer and his anger is pervasive, especially in “No Difference”, when he shouts out, “I’m here today, gone tomorrow, and I don’t give a fuck if they remember me.” The Bay Area thrashers pick up where debut Annihilation Of Civilization left off and offer a tad of the groove that appeared on the follow-up The Underworld. At 10 songs and 38 minutes, Evildead doesn’t mess around, marching ahead with a crunchy and punchy guitar and moshing rhythms with bursting lead guitars from Juan Garcia. Loving that chorus riff in opener “The Descending” and the forceful march of “A.O.P. / War Dance” could have fit right on Slayer’s Seasons In The Abyss. The bass is bouncy, especially on the chaotic “Blasphemy Divine”, which is that short, no-nonsense, killer track that helps round out a thrash record. The old heads still know how to get it done; the United States Of Anarchy holds the angst and anger of 2020 and there’s nothing like a raging thrash metal record to relieve all that energy.