FLOTSAM AND JETSAM - Blood In The Water 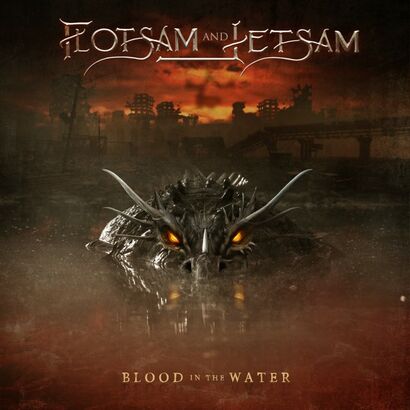 The unofficial trilogy kick-started with their self-titled album in 2016, a truly momentous occasion for fans, signalling that this ol’ dog still has teeth and a helluva lotta bite left in him! A bit of a reset as it were. Despite the worrying (is this over?) name of 2019’s The End Of Chaos, it followed with the same driven fire and pent-up energy. And now the third, built during one of the most devastating and deathly times in world history. It’s a true sign of a seasoned professional, somebody who has it so deep in their psyche that creating mediocrity is not in their DNA, even during the most challenging of times. Bands are born and musical bonds are shaped in bedrooms, living rooms, garages, backyard patios and basic studios. It’s where creation thrives, minds focused on the song. So how do you write and record an album when your band is in individual lockdown and the only connection you have is an internet one? You dig deep, focus and find the zone. After all, there is no place for disgrace. And there never has been, as Flotsam And Jetsam retains the crown of the most underrated band in metal, who should be playing stadiums at this point in their career.

And with album number 14, you recognize immediately that this is the band’s strongest line-up to date with two originals (singer Eric “A.K.” Knutson and guitarist Michael Gilbert), two seasoned veterans (guitarist Steve Conley and drummer Ken K Mary) and most recent addition, bassist Bill Bodily uniting like pistons under the hood.

It’s quite inconceivable to imagine that Flotsam And Jetsam have created yet another work of art, that sees them continue with the same playbook, as displayed by the way Blood In The Water kicks off with the title track’s epic introduction, until drummer Ken Mary takes matters into his own hands with a dizzying hands and feet display. “Burn The Sky” and “Brace For Impact” follow with the same ferocity and breathtaking emotion, the latter, one of the band’s shining moments of catchy glory, as Gilbert and Conley duel it out. Are you ready to “brace for impact”? You better. But this is the world these Arizonians thrive in. Upbeat, borderline speed metal with searing harmonious leads and a set of lungs that is one of the greatest in heavy metal history. Hell, rock history; A.K. is that much of an (un)holy grail when it comes to voices.

Despite the fact that this album is aggressive, there are two well-positioned breathing spaces, that will most definitely turn heads. “Walls” purposely takes a stab at rhythmic riffery, Ozzy’s glorious but sadly overshadowed Jake E. Lee-era springs to mind (“Waiting For Darkness” and “Shot In The Dark” moments echo wildly), possibly the most commercial Flotsam track in ages. And this is where you can feel A.K. is in the zone, totally thrives on those uplifting chorus lines that strike like a powerful gust of wind hitting a ship’s sail. Emotions in motion.

“Cry For The Dead” is an epic that ranks with some of the band’s finest, easily nodding at the Doomsday/No Place era for comfort, complete with the chorus “I can’t live without the ones I love/need”, particularly striking given the current lockdown measures the entire world has been facing. The song is a fine example of how Flots have truly honed the gift of creating memorable music that will dance in your head for days.

The majestic metal moments don’t end there. A.K. admits that he channeled his inner Rob Halford on “Too Many Lives”, whereas “A Place To Die” is a galloping juggernaut and “The Wicked Hour” is quite simply an aptly-titled headbanging frenzy while the dynamic guitar duo pick frantically. What powerful music is all about.

The album closes with a burst of venom as “Seven Seconds ‘Til The End Of The World” grabs you by the throat, while time is ticking, ticking, ticking. And then immediately you are drawn to Blood In The Water’s doomsday cover art as the creature peers madly at his next victim. You.