FULLY CRAZED – Off The Hook 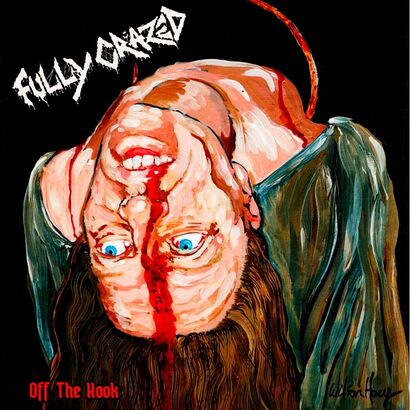 This Victoria, BC-based band, with ex-members of Dayglo Abortions and Shutdown (granted, that last one might not mean a lot to many people, but I'm from Victoria, so it means something to me), surprise a bit on this killer LP. The band photos scream skate punk, the cover art reeks of '80s extreme thrash, and that logo, well, call it crossover. And, hey, here we have it, Fully Crazed tapping into the best of all the above, plus a bit more, on this frantic release.

For example, check out the excellent Venom-on-skate-punk of opener “Blast Ramp” and the Lemmy worship of “Pump 'em and Dump 'em” for a one-two wake-up opening punch you won't soon forget. Or maybe you will in your drunken haze, pretty sure the band will, but not before they hammer smash your face through a ton of other songs that end up being skate punk, sure, but filtered through a very heavy lens, metal and crossover riffs all over the place here. The lyrical content of songs like “Piss Jugs” might not exactly be high literature, might not even be up to the level of a lot of metal lyrics, but, hey, this is skate punk at heart, after all, songs like “Death Blow to the Blader” offering a bit of ST stomp for respite before the chaos continues on the album's second half and, really, forever and ever for these punk lifers.

Great album here with tons of spirit and an obvious love for punk and metal and everything in between, Fully Crazed delivering the latest soundtrack for old dudes breaking bones on boards and loving every minute of it.