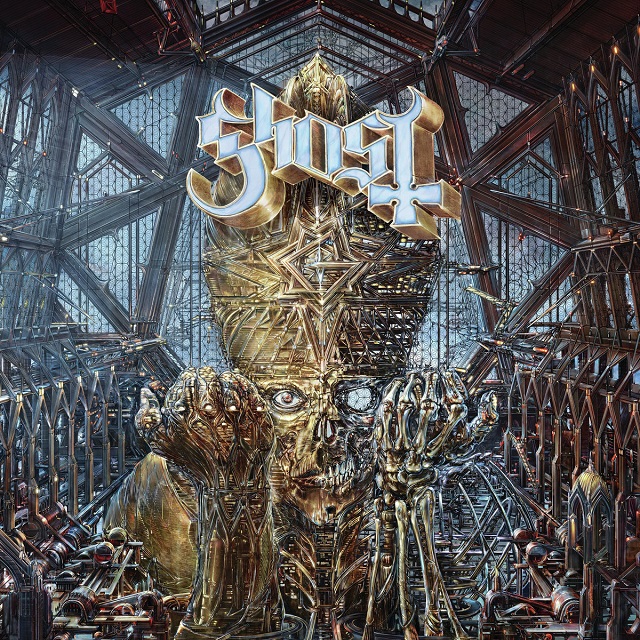 Tobias Forge is a seer. A prophet. A diviner.

I know. That’s quite a statement from a protestant pastor (that would be me) when talking about a band leader who delves into the occult and the perils of organized religion. More on that later.

But how else to explain that his last Ghost effort, Prequelle, dealt with plague and sickness BEFORE the Covid pandemic reared its ugly head?

And then there’s the new one. Impera is a consideration of empires that grow and rule and then crash and burn, only to be replaced by other empires. Forge put this one together BEFORE the current crisis as Russia tries to regain the former stature and power (and size) of the Soviet Union. His work on the album preceded questions about the role of the U.S. empire in the world.

Forsooth, the guy is a soothsayer.

The man behind the makeup of Papa Emeritus IV denies any special gifts. Instead, he says, history is circular. What goes around will come back around in due time. It’s an Eastern approach to viewing the world, as opposed to the Western sense of life and history as linear, a straight line that takes us from point A to the destination of Z. Do not stop, slow down or smell the roses. Just get to the finish line.

Okay, that’s a bit high-fallutin’ for rock ‘n’ roll, but Tobias Forge is a different kind of ghoul. He’s a man with a plan, who is already looking ahead to the next three or four Ghost albums. But for our purposes, we’re going to concentrate on “Imperia.” And that’s easy to do; this album is mind-blowing—musically, lyrically, in musicianship and production. I played it 15 times over the first two days I had it. And who knows how many times since.

I hope Forge will forgive if we do a linear rundown of Impera. From song to song to song. 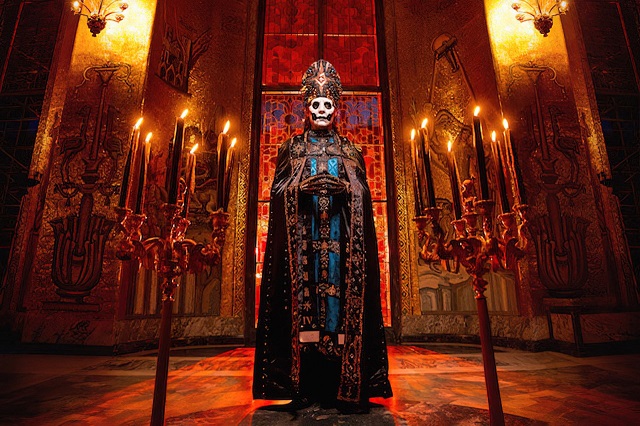 § “Imperium.” A quiet and slow overture to set the scene for what’s to come. The guitars, acoustic and electric, carry this one forward. One can hear echoes of “Imperium” throughout the proceedings, giving this album a certain prog feel. Tobias Forge can do anything.

§ “Kaisarium.” The call to arms, a Rush-reminding arena rocker (complete with rhythmatic change in the break) that spews indignation over injustice, judgementalism and extremism.  Hypatia was a pagan philosopher/mathematician in ancient Alexandria who was murdered by Christians.  It may have happened 1600 years ago, but Tobias is still pissed—and finds modern equivalents.

§ “Spillways.” I can’t decide who all this sounds like. The intro is sorta Bon Jovi-ish, with a pounding, rinky-tink piano a la “Runaway.” But the song also has echoes of 10CC and The Sweet. In any case, this one is pure Papa for now people—I suspect that metalheads are not going to like it. Too bad. It’s a great, great song, really up-tempo and catchy. The message, on the other hand, is not so “up” according to Messr. Forge: “This is an elegy for the darkness that most people have inside. When you have a dam, spillways are the run-offs so the dam won’t overflow. That darkness inside us needs to find its way out.” I’ll be dammed.

§ “Call Me Little Sunshine.” The first single from Impera (although “Hunter’s Moon” came out first, due to its movie connection). A mid-tempo piece that starts low and slow with a simple guitar part—and then rises up with power and grace. Victorian England (and the world) were forever changed by the Industrial Revolution. Lives were altered, for good and bad, as the devil tempted folks to go farther and farther into the technology at the expense of human contact and relationships. Like most Forge works, the lyrics have implications for past, present and future. And yes, you heard it here: Forge is warning us about Satan and his temptations.

§ “Hunter’s Moon.” Forge explores his fascination with horror flicks in this powerful rocker that accompanies the end credits for the movie Halloween Kills. Our lyricist says it’s about yearning for someone from the past—of course, most of Forge’s songs deal with a yearning of one type or another. On this one, Ghost kills.

§ “Watcher In the Sky.” A great meld of up-tempo metal and hard rock, with a huge beat that you can dance to. Forge says this is about how science can have some unintended effects on people and society.

§ “Dominion.” A short horn hymn (although the performance is likely on the keyboards). Slow, majestic, it’s not so much as a segue as it is an interlude, an aural palate cleanser before things go crazy with…

§ “Twenties.” Okay, hear my confession. The first time this assaulted my ears, I was puzzled and irritated. Forge himself says this is “Slayer meets Missy Elliott,” and that’s very accurate. It’s catchy, but “Twenties” sticks out because it doesn’t seem to fit into the rest of the album. And the lyrics? Forge’s wordsmith talents seem to go into parody:

Forge is likely talking about more than the decade in which we live. The Roaring 1920s were a turbulent time of wealth and anything goes—but new empires of Nazism in Germany and Fascism in Italy started to make their presence felt. And the financial empires imploded into the Great Depression. Is that where we are headed?

I should add: this song is growing on me, the more I hear it. I still wonder if it wouldn’t have been better as a bonus track…

§ “Darkness At the Heart Of My Love.” A brooding piece, almost a love dirge. Forge goes back to one of his favorite promises: “I am with you always.” Who “I” and “you” are is up for speculation. God and people? Lovers? Whatever. The song makes the case that pure love is not just light and joy.

§ “Griftwood.” Papa Van Halen, with a tapping guitar intro and blazing solo in the break. Forge’s voice takes this away from the VH sound and into power Papa land. Tobias says this song is about former U.S. Vice President Mike Pence—a Bible thumper who preaches one message but acts in an entirely different way. Such men promise the world: you’ll “never ever suffer again.” Jesus didn’t even promise that!

And speaking of biblical references, where in hell does Forge dig his up? In this one song, he mentions Asiah and Sennacherib. Most Christians don’t know who they are. Does he have a secret religious counsel who feeds him these names and words? Does he know Latin? Inquiring minds want to know…

§ “Bite Of Passage.” A brief instrumental interlude that takes the mood down, preparing us for the terror of a serial killer.

§ “Respite On the Spital Fields.” Tobias the Ripper goes back to the fear inflicted by one brutal killer in Victorian England. It’s a tune and performance of mystery that builds and recedes in turn. The fading end harkens back to the opening track Imperium. If you have your player on repeat, one hears the decline of one empire and the start of a new one. And so it goes…

Impera is the sum of many parts; Papa is not working alone. Just which Nameless Ghouls are on the record and what they’re playing is not clear—but that’s why they’re nameless, of course. Opeth’s Fredrik Akesson helps out his fellow Swedes with searing guitar leads that add a huge amount to the sound. And then there’s the songwriting assistance. Folks who have worked with Madonna, Lady Gaga and Katy Perry have offered their ten cents worth to “up” the catchy quota. And Klas Ahlund, who helmed Ghost’s classic Meliora, is back to twiddle the dials.

Impera is the best Ghost album—up to now. It further synthesizes Tobias Forge’s vision of catchy, powerful music combined with thoughtful lyrics wrapped in an entertaining shtick. It is a realization but also a promise. That’s a reason to celebrate this album, this band, and the work of this man. Forge is one of the most exciting men in rock, onstage and in the studio.

All of that begs the question: why in God’s name would a middle-aged United Methodist pastor from the Bible Belt like Ghost?

Let’s set aside the hooks, the arrangements, the guitar army and swooping vocals and everything that takes the music outside the bounds of typical metal.

Does Tobias Forge go after Christians with a square hammer? Absolutely. But what might surprise him and you is that there are plenty of us at Sunday worship who agree. Organized religion has done terrible damage over the centuries. It is filled with liars, snakes and hypocrites (and we all fall into those traps at various points). We’re an easy target, and rightfully so, because we’ve set ourselves up to be holier than thou. Many—maybe most—at the local level do our best to follow Jesus’ example and words and still fall short. It hurts to be reminded of that. But we need to be jabbed, and it’s a little easier when there’s a big beat and melody accompanying it.

Yet O ye of little or no faith shouldn’t get too fat and sassy. Papa also melts down the secular golden calves of science, technology, business, government, and the various leaders in those fields as well. And then there’s the things we all have in common—selfishness and greed, anger, hate, bias, and all those human attitudes and behaviors that make us less than what we could and should be.

Moreover, the Ghost gospel is one that requires thought and analysis. Forge is a man of depth and substance, and his messages reflect that. There are a lot of possible interpretations in the lyrics, and that is both appealing and challenging (note: Jesus’ parables also require the audience to reach their own conclusions…which may already have occurred to Papa in all his incarnations).

In Forge’s circular view and philosophy, the next rotation might bring something better than the last—the possibilities are endless and likely good. The circle itself is complete and whole, ever connected, unbreakable. The spheres of the sun and stars bring light, which is reflected by moons and other heavenly orbs. The dark comes from the void at the finish of all things. The circle offers hope; the straight line comes to a dead end.

So while Tobias Forge sees past, present and future in the circle of life, he’s not giving in to the depression and plague and corruption and spiritual hubris that are part of every era (and documented in his music). He’s looking for signs of something better just around the corner. That, folks, is hope and faith. So with Impera, Ghost is not just taking down empires. It is building something new and positive. Thank God.

And that’s why this follower of Jesus is into Ghost. Amen.