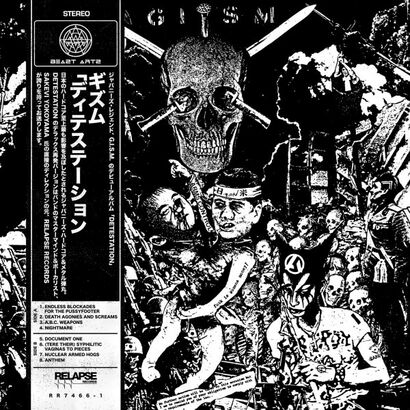 I'm always up for a reissue of a historically significant extreme record, and Gism's Detestation is certainly that, the Japanese band laying down a supremely heavy record for 1983. It's gotta be said that these vocals, which are way too loud in the mix, are going to be a stumbling point for even diehard extremity freaks, a sort of spoken/grunted mix that just kinda sound silly half the time. But, damn, man: it was 1983, and the tunes were, like, beyond Lemmy-loving, past Discharge, totally revved up punk/HC, as opening killer “Endless Blockades For The Pussyfooter” proves; follow-up ragers “Death Agonies and Screams” and “A.B.C. Weapons” continue the chaos admirably, and, you know, by the time “Nightmare” hits at track four, either you're just beaten into submission or you're kinda admitting that those vox actually do make sense. Everything makes sense here, really, this album heavier than possible for 1983, but here it is, taking Venom to new places, songs like “Document One” just totally off the wall, racing to the finish line, more punk than metal but not without some metal touchstones hovering around in the chaos. “Nuclear Armed Hogs” is really the album's peak Gism, fantastic in attitude and sound alike, the band racing through it, the vocals just over the top, but in a way that makes sense. We get three bonus tracks here, but I'd be happy enough with just the eight originals, the bonus tracks, as always, taking away from the original album's flow and impact, even though all three are, naturally, shredders of the highest order.