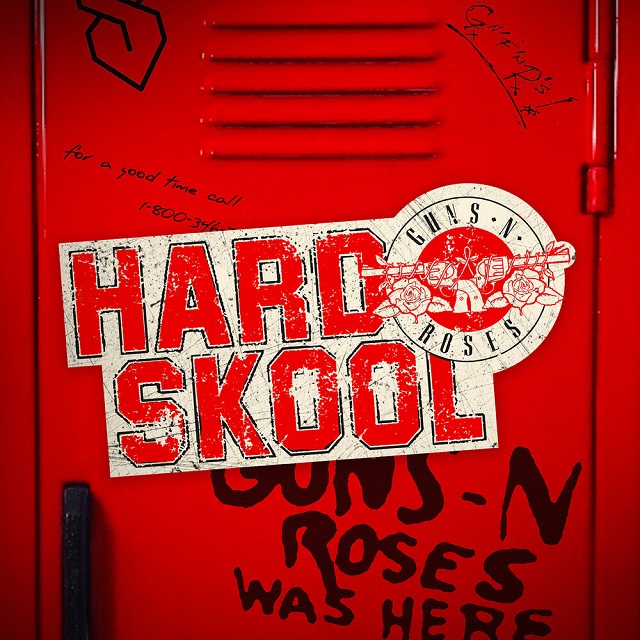 In August 2021, Guns N’ Roses released their first new material since 2008, in the form of a digital single, “Absurd”. A month later, in September 2021, GN’R released another new digital single, “Hard Skool”. Now in February 2022, both those songs, paired with a couple of live tracks, are available in CD format as the Hard Skool EP.

Both “Hard Skool” and “Absurd” are reworkings of unused songs from the Chinese Democracy sessions. Originally titled “Jackie Chan” and “Silkworms”, they’ve been overhauled since guitarist Slash and bassist Duff McKagan returned to the band. Each of the songs clock in around the three-and-a-half-minute mark, with “Hard Skool” restoring the faith of fans who’ve been around since Guns N’ Roses were considered the most dangerous band in the world. It’s upbeat, catchy, energetic, and would be right at home on Use Your Illusion I or II. “Hard Skool” is truly an exciting song!

Then we have the appropriately titled “Absurd” - an industrial / punk rant containing such lyrical gems as “pussy full of maggots,” and “syphilitic priestess baby.” “Absurd” is just as much of a head-scratcher musically, with the song appearing to end just past the two-minute mark, when in actuality it’s delivering an unnecessary interlude, before resuming its insipid attack. Coming across as a close cousin to “My World”, “Absurd” would almost be better unheard.

Due to the limitations of the basic cardboard sleeve packaging, no information regarding the live versions of “Don’t Cry” and “You’re Crazy” is provided. Presumably, they were recorded sometime during the Not In This Lifetime Tour, which ran from April 2016 to November 2019; details as to when and where are strangely absent. “Don’t Cry” delivers early ‘90s nostalgia, although Axl’s voice does begin to strain slightly towards the tail end of the track. A mid-tempo rendition of “You’re Crazy” is situated part way between the original version from Appetite For Destruction, and the acoustic arrangement found on GN’R Lies. Given the extensive amount of Not In This Lifetime Selects concert video Guns has uploaded to YouTube, only two live songs on this EP amounts to a tease; but maybe that was the intention?