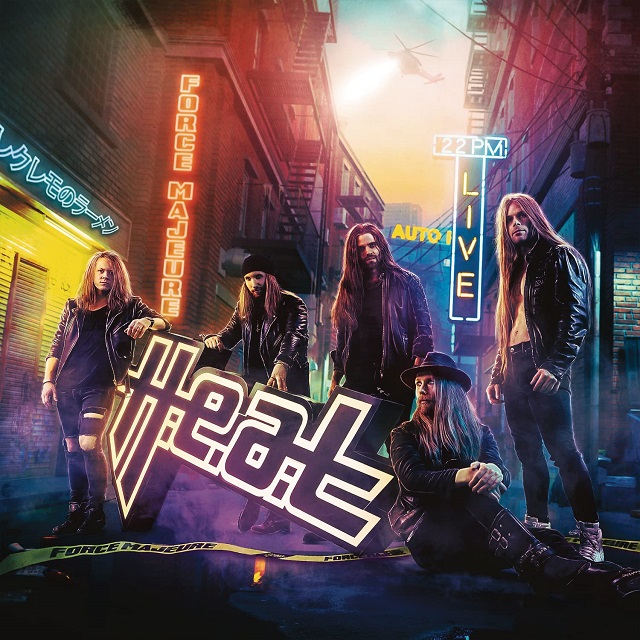 Seventh studio album from the Swedish melodic hard rockers, first without Erik Gronwall (now in Skid Row), and returning original singer Kenny Leckremo. I know, what are the differences between Kenny and Erik? Leckremo has a melodic tone with a touch of grit at times, Gronwall has a theater background, similar with a clean smooth voice also. Both have lots of vibrato and power. It's really not much of a change. When I heard the first two Force Majeure singles, "Back To The Rhythm" and high energy rocker "Nationwide", I knew things would work out just fine for both singers. "Hollywood" another great choice for a single with a big hook, fun video and see if you can find the Def Leppard album cover, and a Europe single. Two bands H.E.A.T. are clearly influenced by.

"Tainted Blood" is more riff driven and I love how Kenny drops in little ballsy moments like Joey Tempest does. Nice mid-pace for "Hard To Breathe" and guitar melody that reminds me of Bonfire, Gotthard, and Magnum. "Not For Sale" I could hear behind a scene in a movie. Ballad "One Of Us" lets Kenny's voice take center stage with an accompanying piano. Riff for "Hold Your Fire" has a little funk and spunk with a hook for AOR radio. Spirited keyboards like power metal greats Stratovarius or Freedom Call would do begin "Paramount", and "Wings Of An Aeroplane" follows with fine guitar accents and another great chorus riff accompaniment. "Demon Eyes" ends the album rockin’ with a power metal energy.

H.E.A.T. are, well hot, should be huge, all over radio, headlining large theaters if not arenas at this point. Hooks alone they could run a fishing boat. Melodies, riffs, and solos are everything one would want from a band keeping ‘80s melodic hard rock alive. Force Majeure will be in my top ten for the year, just like the album II was in 2020.