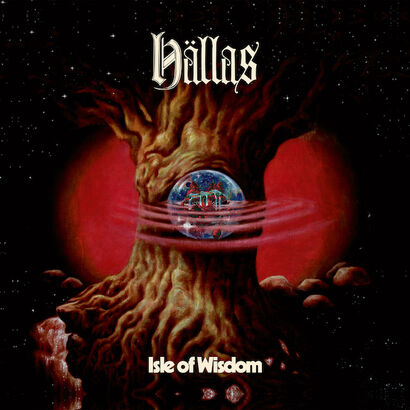 Sherman, to the Wayback Machine! Set the date for '72 Britain. While Hällas are Swedish, the sight/sounds are decidedly Seventies prog and the lyrics, while in English are often as difficult to discern as some of the thick UK dialects. Usually not a fan of that pompous and pretentious sound/era, but I really enjoy Hällas (especially live), despite their proggy affinity. Perhaps it's the fact that only the disc closer exceeds seven minutes, the music never truly venturing down the rabbit hole, periodically pulled from the brink by more hard rock/metal sensibilities.

Still (sadly) a relative unknown on these shores, for the last decade, Europe, and their retro-loving homeland, have enjoyed the trio of previous releases (initial eponymous Ep and a pair of connected full-lengths), melding together synthesizers, guitar hard rock and adventurous sci-fi narrative. Must be that omnipresent ABBA influence, as the seemingly incongruous mix retains an infectious, sing-along quality.

Sounding as if an intergalactic vessel is touching down, an instrumental Moog interlude kicks off the otherwise lyrical "Birth Into Darkness", a staccato stomp (bassist Tommy Alexandersson repeatedly delivers the creepy line, "Into darkness"), until the final third, where a joyous keyboard bounce takes the melody home. It melts into more spirited "Advent Of Dawn", built around a simple, repetitive ditty. The rest is just embellishment, including a crashing guitar break. Buried within the proud strut of "Earl's Theme", the keys mimic a brass horns fanfare.

While none of the eight inclusions could be classified as speedy, the lone slow down being "The Inner Chamber", which begins like medieval madrigal, then eventually progresses to an airy/spaced out synth jam. A steady bass rumbling, guitar drive forms the backbone of "Elusion's Gate", augmented by the warm, fuzzy synth sounds. Not much elaboration in its 4:05 running time. The same is not true of "Gallivants (Of Space)" an infectious (and slightly aggressive, in terms of tempos and tones) romp, with plenty of old school keyboards (even a bit of a showcase/solo)! The slow drone of sustained organ notes backs "Stygian Depths", a quick, recurrent run of high pitched synth shattering the calm. "The Wind Carries The World" finale is all encompassing, and at 7:19, is afforded ample room to investigate all textures (timing, pace/tempo, sounds, instrumentation,etc.). However, it's not a kitchen-sink approach to songwriting. No, despite the experimentation, it retains a cohesion and the omnipresent sense of melody inherent elsewhere/throughout.