HATH - All That Was Promised 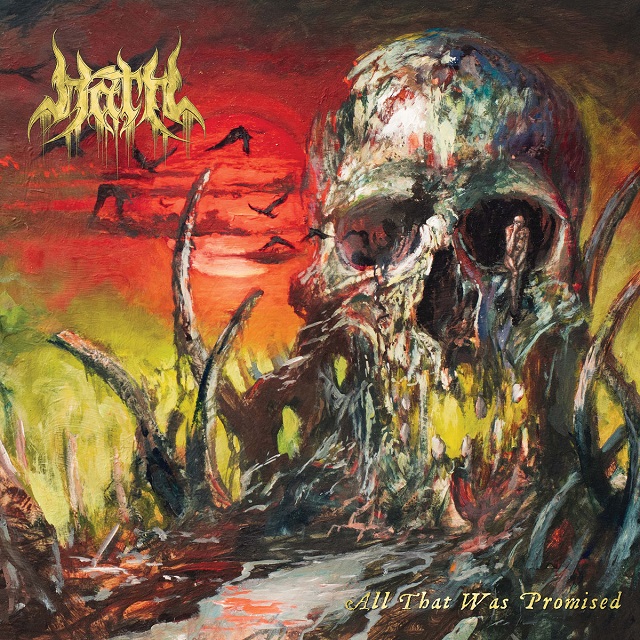 I enjoyed what New Jersey's Hath did with their 2019 debut Of Rot And Ruin, the band storming out of the gates with a very strong, assured debut of slightly sideways death with black and tech tendencies, so I was very interested to see what they put together on All That Was Promised.

I love how opener “The Million Violations” takes its time with a jagged piece of death before launching into the grinding “Kenosis” (see also: that song's mature and thoughtful solo part and huge closing), and I'm just sitting here thinking, man, this is kinda what I wish Gojira sounded like these days, a thought I also had while spinning Of Rot And Ruin. But this record is even better than that one, that much is apparent two massive, moving songs in, Hath growing up but never sacrificing intensity, as on the grinding labyrinth of “Lithopaedic”, which brings to mind fellow New Jersey forward-thinkers Human Remains.

Like last time, the record as a whole is a lot to digest, and I start to zone out a bit by the time we're in the final third, but it just goes with this ambitious territory. It's hard to be exhausted when songs like the enormous “Decollation” take you on such a fantastic journey, sort of like Ulcerate for arenas, Hath keeping the production pristine here and never going to the caves or the sewers, but also not going to the cosmos, instead, just fucking going, going, going, man, and you have no choice but to join them, like on standout deep cut “Casting Of The Self”, which finds the band absolutely nailing what they're after, or the title track and its successful delivery on post-metal's great, underutilized promise.

And closer “Name Them Yet Build No Monument” has some of the hugest, and most effective, grooves I've heard in ages. This is a great record, a step up from the debut, and one that finds the band firmly positioning themselves in a very unique spot in extreme metal.