HELL GUN - Kings Of Beyond 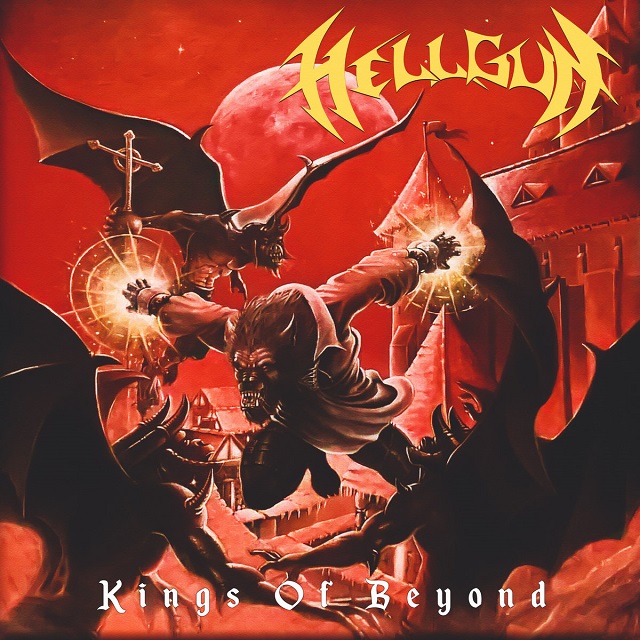 Not to be confused with the superior, Accept-minded Swedes, Devil’s Gun, the full-length debut from this Brazilian outfit, opens with 2:05 "Dracula" instrumental, which feels like one of those ‘80s Shrapnel guitarist's solo efforts. Thankfully, it's just a passing fad (as it was back then!) and the twin guitar quintet kicks into the title track with earnest (if rudimentary proficiency). There's a decidedly schizophrenic feel to the music, never sticking with any coherent style for very long. While Internet comments attempt to put Hell Gun in the burgeoning NWOTHM category, these eight proper tunes (plus aforementioned voiceless intro) are closer to a mix of old school speed metal and proto-thrash. In existence since 2013, and surely eager to finally record the "all important" debut, as often happens, the band has unfortunately bitten off more than they can chew.

Matheus Luciano (singer) has been part of the previous released EP and "Sacrifice" single (reprised here, begun w/ maniac laugh), but while his English enunciation is more than adequate, his occasionally yelping style is an acquired taste (see "Night Of The Necromancer"). It's not until the third selection, "Tears Of Ra", that the guitars really get going. Gang vocals come the titular chorus, "Revolution Blade" proves to be the most "finished" structure of the lot. Little surprise it was therefore chosen as an online, promotional tool/pre-release teaser. "Devil Dogs" lets it all hang out, a speedster punctuated by cartoon sounds (horse gallop, ricochet, etc.) effects influenced by Anthrax's "I Am The Man". Watch the beat! "Emily's Possession" finale is another staccato step in the right (future) direction.

Like the original Saturday Night Live cast: Not Ready for Prime Time Players, but look what that group went on to star in...will similar success await Hell Gun?