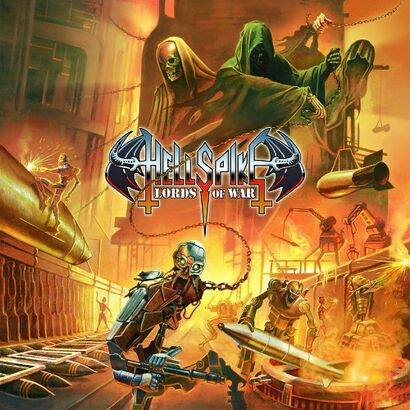 Too old to trick-or-treat, but Halloween still provided some goodies this year, most notably, the release of the debut from new Portuguese outfit, Hellspike. The trio of scene veterans offer a quality effort, walking the line between vintage sounding thrash/speed metal. The accent is on guitar playing, rather than mere riffs and, truth be told, if the gruff (yet discernible) vocals of bassist Rick Thor were smoothed over (higher & more operatic), the music would probably be classified as old school power metal: Jag Panzer, Grave Digger, Iced Earth, etc.

Bullet belts, bandoleers and straight leg jeans tucked into white, hi-top sneakers...what year is it again? Then again, the first sound heard, as they commence opening "Titan's Clash" is a lightly strummed guitar. Pun intended, fret not, as the intensity and speed are quickly amplified, augmented by a couple of (literal) explosions: gritty and Motorhead-ish. "Storm Of Fear" has that echoing "whoa whoa" refrain, in the distance. Snare drum pummeling "House Of Asterion" is a riff-ride, punctuated by some whammy bar dive bombs, but always returning to a basic melody. March of a jack-booted throng greets "Full Spectrum Dominance", the guitar adopting a dirty, echo tone as the 3:45 instrumental grinds away. It is not the sole voiceless option, as a few songs later, there's "Iron Forces United", basically an extended (3:48) guitar workout/solo.