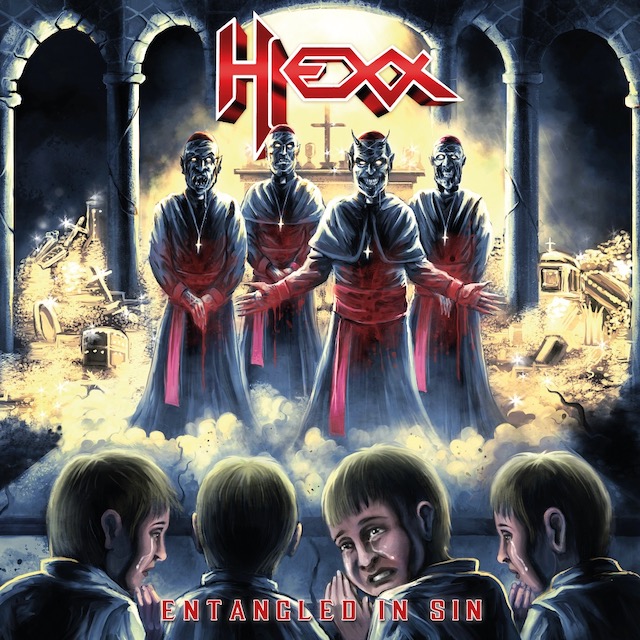 So does anyone know or remember this band from the ‘80s? I know I don’t, there was so many groups and albums during the decade it was hard to keep up. Although MTV made it much easier. But, never heard of these guys from San Francisco, don’t even remember seeing the album covers in the racks for No Escape (1984, Shrapnel Records), or Under The Spell from 1986 on Roadrunner. New album art is cool. Another one of those names I guess that got lost in the shuffle, clutter, with and on and off again history; two full lengths and a few EPs and demos in the ‘80s, on hiatus after the album Morbid Reality 1991, and returning in 2013 since.

“Watching Me Burn” starts the album with twin leads and a rhythm build before the main riff and unique tone to the raspy vocal recalls ‘80s underground traditional metal from Helstar, Attacker, Manilla Road, Omen, and Sacred Oath. “Entangled In Sin” is a tad more aggressive, “Vultures Gather Round” (cool title) sits well in a mid-pace, with a more melodic chorus featured in “Beautiful Lies”.  “Power Mad” has early ‘80s Raven/Anvil balls, with “Internal Enemy” a full on thrasher. At the half way point, a slower pound to “Strive The Grave” is needed.

Not bad, not great, ten songs, plus three bonus tracks. Maybe too long off the grid, or late back to the game, too underground a name, unpolished? Not sure, but Hexx would appeal to old school ‘80s metalheads, and fans from the newer generation like Enforcer, Skull Fist, and Night Demon.