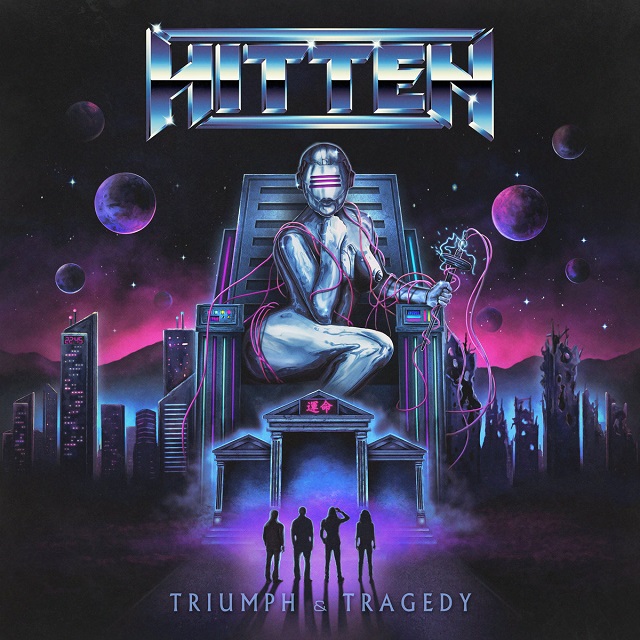 Boy, have bands hit the bottom of the pile when it comes to choices left for a name. Hitten? Someone explain. But, luckily the music rocks ‘80s style. Nice to have another one of these bands keeping the sounds from that decade alive. Third album from the Spanish five piece, whose bass player is Satan?

“Built To Rock” opens with a Van Halen and Mr. Big fancy guitar and bass riff combo, lots of energy and edge with a big chorus and plenty of twin guitar harmonies too. “Eyes Never Lie” some traditional/power metal riffing with melodic AOR verses and chorus. Damn, can’t put my finger on it who singer Alexx Panza reminds me of. I know, its Johnny Gioeli (Hardline, Axel Rudi Pell band) meets Tobi from Edguy! He’s got a swagger, strong mid-range and hits big screams from time to time. Lots of retro graphic and colors for video single “Hard Intentions (Secret Dancer)”, great leads and vocals. “Ride Out The Storm” keeps up the consistency with some double bass. “Core of the Flame” is slower with a mid/late ‘80s moody Saxon feel. How’s that AOR vocal starting “Under Your Spell”,  NWOBHM comes through in “Light Beyond the Darkness” and takes a turn with lots of killer Vicious Rumors level shredding skills.

Title track ends the album at eleven minutes, very Maiden like and Gamma Ray twin guitars, and dynamics. Put these guys up there with leaders of the new wave of glam metal, '80s hard rock, with Eclipse, H.E.A.T., Crazy Lixx, Girish and the Chronicles, Bloody Heels, and Dangerous Curves. Or Traditional Metal because they are a little of all that ‘80s good stuff.