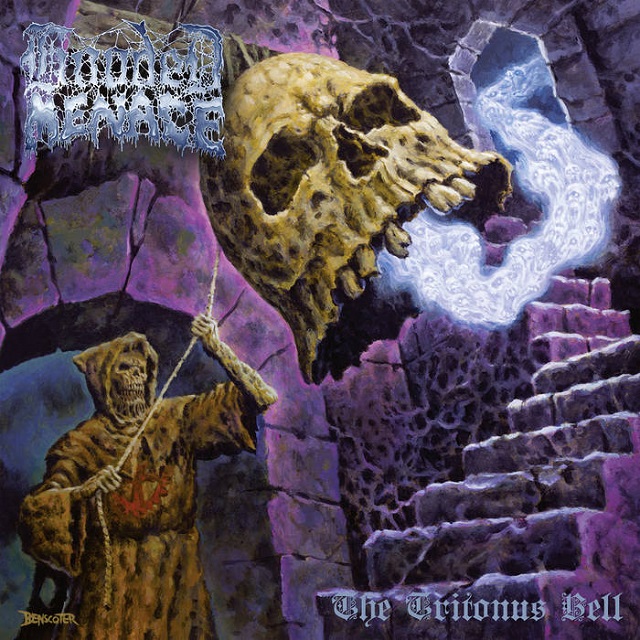 Man, Finland's Hooded Menace have been on some of the best labels around—Razorback, Profound Lore, Relapse—and now they're on to album number two on the getting-better-every-day Season Of Mist, The Tritonus Bell offering more of the craggly and crusty doom/death that the band does so well, but with a pretty sharp focus on their more traditional doom and metal elements.

I always filed this band next to Coffins in my head, although Hooded Menace are far more trad doom and metal, but the overarching vibe of just pure caveman horror runs through both, although Hooded Menace take regal classic doom to heart more than their Japanese counterparts, as shown perfectly on this album's “Chime Diabolicus”, which, come solo time, rages almost party-hearty. Really, it's all very first-two-Paradise Lost albums, but with a touch more crust and NWOBHM, which is bonkers, but that's Hooded Menace for you, the band here tapping into their love of trad metal very strongly (check out the stomping “Blood Ornaments”, which, by the time its glorious nine minutes are up, turns into a massive sludge/doom monolith before laying down some glory-ride riffs to die for), creating an album that absolutely kills it and will be hard for anyone who is into any of the many aforementioned genres to deny.

“Those Who Absorb The Night” actually extends that Paradise Lost comparison into PL album three, but, again, with a bit of a crustier edge to the regal doom/metal, sort of like halfway between the good parts of the Black Album (okay, fine: all of Draconian Times) and His Hero Is Gone's Monuments To Thieves. “Scattered Into Dark”'s doom/sludge/death brings things to a massive close before “Instruments Of Somber Finality” closes the door here with 2:46 of instrumental mid-tempo trad metal perfection. And that Wes Bonscoter art? Again: perfection.