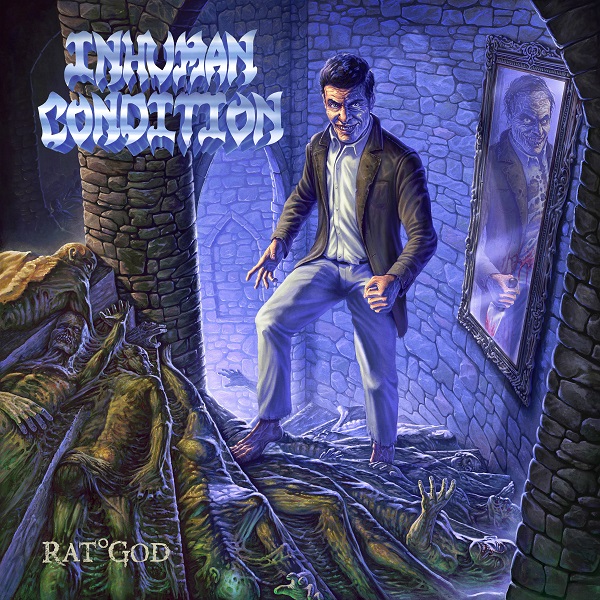 With death metal luminaries at the forefront of this new beast, Inhuman Condition’s Rat°God is a stunning, blasting, and catchy death metal record. Featuring former Massacre members Terry Butler, Taylor Nordberg, and Jeramie Kling, Inhuman Condition reminds of Leprosy/Spiritual Healing era Death and can be seen as a spiritual successor to Massacre.

The Massacre influence is a no-brainer as the band name is taken from their ’92 EP of the same name, the font type is the same as Massacre’s and thankfully Rat°God has the no-nonsense attitude and liveliness of the classic From Beyond and not the dull 2014 “comeback” Back From Beyond. Besides that, the venerable Rick Rozz contributes a ripping solo on “Tyrantula” and Cannibal Corpse’s Paul Mazurkiewicz wrote the lyrics to “Killing Pace” and also contributes guest vocals in a few spots. I love how the album opens up with the quick “Euphoriphobia”. It’s straight up speed and a thrashing tempo – no build up necessary! The songwriting is on point with meaty riff transitions and the beefy guitar tone with the wild soloing is taken right from late-‘80s, early-‘90s DM.

At nine songs and 32 minutes, no song exceeds 5 minutes, which gives listeners a clue at what they’re in for. The guys clearly had a plan in mind to not screw around and leave an imprint on that classic death metal formula. Kling’s vocal work also shines with a thick growl with lyrics still audible. Rat°God is a fun album impossible not to headbang to and offers plenty of reasons to return for listens.