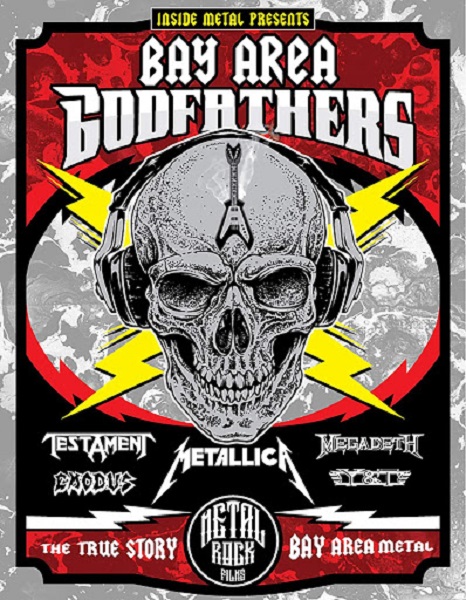 Another 90 minute look at the comprehensive history of San Fran metal and hard rock, from those that were there. Early on, Eric Peterson mentions that Y&T came to his high school and played, during LUNCH! Wow. First ten minutes is a bunch of old heads name checking heretofore unknown club bands from the late ‘70s. After that, it's down to the NWOBHM influence on a new generation of youngsters. The chronology continues with a focus on the role of zines, record stores and college radio. By the way, those elements were not exclusive to San Fran, but given the proximity to west coast labels (and local Shrapnel honcho Mike Varney being in-town) got the word out faster and more widespread than even bigger US hubs like Chicago and/or NYC.

Midway through the vid, there's an emphasis on the origins of thrash (outside Metallica). Yes, there were a bunch of metal bands in the Bay Area before (and after) Lars, a point driven home more than once and many of those players are included. However, once the younger thrashers took over, the other bands got pushed to the fringe. Today, when people have the world, literally, at their fingertips (and perhaps because of THAT, don't go anywhere), one might not understand. When involved in the local scene (in whatever city), you'd go to the club(s) regardless of who was playing, just because there WOULD be something GOOD! Up to '86, there was a community, lots of camaraderie, regardless of genre, then the scene started to fragment, competing to "break out". Sadly, producer Bob Nalbandian (The Headbanger zine) and John Strednansky (Metal Rendezvous zine) go around town, looking at the "legendary spots" (clubs now defunct) of the ‘80s scene.

As with previous editions, devoted to the LA scene, another talkative, promotional flyer-filled walk through the glory era in metal history (although not much usable, vintage live footage, as no one had the financial means or wherewithal to preserve the good times). "It was cool, the bands & clubs were great... you missed out" vibe. Know their schedules undoubtedly make it difficult (if not prelude) but would like to see/hear from more A-list musicians in these projects. By far, the biggest presence is Dave Meniketti (Y&T) as Yesterday & Today (as they were originally known) were the premier hard rockers leading up to the metal explosion. Of the biggest bands, yes, you get Lars, one quick bit from David Ellefson (standing by the gig's loading dock) and a single comment from Lombardo (listed as ex-Slayer). Good to see Jason Becker (and a brief appearance by Marty Friedman), plus Souza and Hunting from Exodus, while Peterson is the only Testament representative and until the end, Andy Galeon (who hasn't been in the band for over decade) is the lone member of Death Angel interviewed. Still, (re)captures a moment in time.