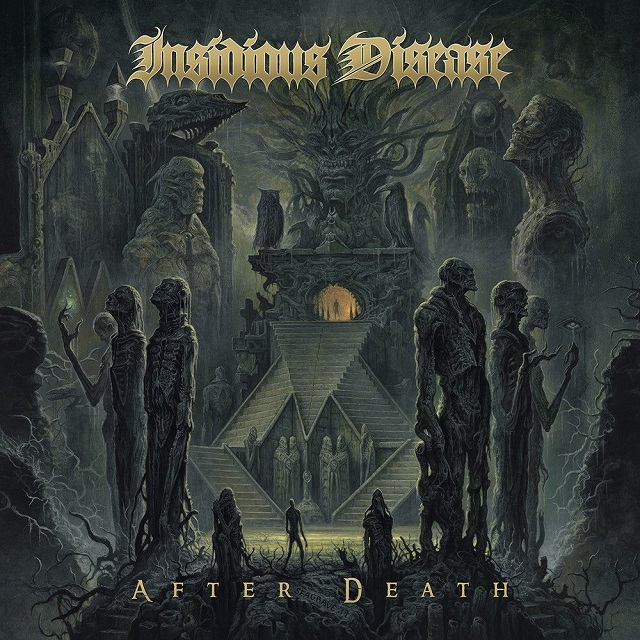 Interesting one here, Insidious Disease putting out one album, Shadowcast, in 2010, then going silent until now. And while that band name and both their album names just beg to be forgotten, the who’s-who of this band doesn’t, with Shane Embury of Napalm Death, Silenoz of Dimmu Borgir, Jon Andersen (ex-Old Man’s Child), Terje Andersen of Susperia, Marc Grewe of Despair, and Tony Laureano (ex-Nile, ex-Brujeria, ex-many others) coming together to become Insidious Disease.

Sounds impressive enough, but don’t expect Napalm Death’s thrilling genre-pushing extremity or Nile’s jaw-dropping technicality. Rather, Insidious Disease here sound like a bunch of buds tipping their hats to classic death metal, the songs being well-crafted and workmanlike walks through mid and speedy DM with a good amount of melody and near-black atmosphere, at times, as on “Divine Fire”. “Invisible War” is excellent, the band settling into a slower battlefield stomp with tons of vibe, really summing up DM well here, and even throwing in some blasting for good measure, while “Born Into Bondage” follows that up with a classic creepy-doom death dirge that turns into raging, blinders-on DM. Still, as good as it all is, it’s hard to not be a bit let down by this record, considering those involved; but put aside expectations and just expect a classic, fun death metal album, and After Death will do just fine.