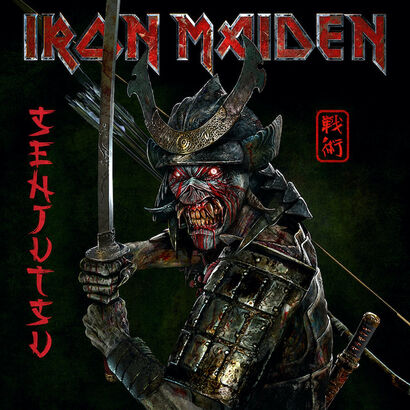 It’s always an event when a new Iron Maiden is on the horizon. One of the giants of heavy metal, it’s fun to see how their mascot Eddie will be portrayed, but most importantly it’s the sounds that emanate from the speakers once the needle hits the vinyl. Since Bruce Dickinson’s return over 20 years ago, the mighty Maiden machine has churned out records that mix lengthy tracks with steady and sturdy rockers and it’s no different on Senjutsu. Bassist Steve Harris ups the ante with three straight epics to close out the record; each over 10 minutes long! Eddie takes the form of a samurai and while his blade is sharp and his cuts are clean, some of his swings are wild and need seasoning.

Before heading to the conclusion, it’s all about the beginnings and the 8 minute title track starts in a subdued fashion. A militaristic rhythm takes the stage throughout this battle march with no deviations - it almost feels like industrial metal. Dickinson carries the tune with a strong vocal performance, but overall it’s an opener that isn’t exactly a burst of energy. The Brits kick it into high gear with follow-up “Stratego”, a 5 minute cannon fire that has all the hallmarks of classic Maiden, meaty chorus, galloping rhythms, and brilliant lead work by the guitar trio of Adrian Smith, Dave Murray, and Janick Gers. This is definite single material and wouldn’t be surprised if a music video was made for it. First single, “The Writing On The Wall” takes center stage as cut #3 and the western, folksy vibe is unique for the guys, showing they are capable of new tricks and despite the lazily put together chorus, it stands as a solid track that makes for a good listen. “Lost In A Lost World” is another different one that could fit in with the Blaze Bayley days, especially on The X Factor; Dickinson takes an atmospheric approach with the vocals before a ghostly vocal effect takes place. The song forms into a snug mid-tempo groove filled with a grandiose chorus and more vintage melodic leads from the talented guitarists.

Rounding out Disc 1 is the shortest slice of music, the 4 minute “Days Of Future Past”, another classic rocker that falls in line right with the Brave New World comeback record. Smith and Dickinson are at their best here and should go well live. “The Time Machine” holds more progressivisms and also features the most breathtaking, melodic chorus the album provides. Lyrically reminds of Rush with Dickinson in storyteller mode and stands as one of the best tunes since his comeback.


Disc 2 is where greatness and frustration lie, the 7 minute “Darkest Hour” takes on a war theme and is lyrically chilling and reminds of A Matter Of Life And Death. It doesn’t take the usual approach in terms of structure; it’s almost like a ballad with Bruce carrying the weight of the tune. It’s a grower that might not click on first listen. The star of the show is “Death Of The Celts”. The 10 minute epic is Iron Maiden at its finest, fantastic main melody, masterful, memorable soloing and Dickinson glides with fist-raising vocals as he narrates the downfall of the Celts. It has a defined beginning, middle, and end and doesn’t feel like a long song. If Senjutsu ended here, it would be highly satisfying, but Steve Harris isn’t done with his long, drawn-out pieces. “The Parchment” lyrically fits an Egyptian motif reminding of Powerslave and Harris does his usual – soft intro that blossoms and while strong on the chorus front, it just keeps going and going and going. The tempo picks up at the latter half of the track with a huge soloing section, but overall there’s no reason why this couldn’t be trimmed to 7 or 8 minutes. Closer “Hell On Earth” has a similar structure except Harris delivers one of his best melodies – one that will stick in your head for days. The problem is the song just keeps going; after a climatic solo; it should have ended at the 7 minute mark, but it just keeps going. It would be nice if producer Kevin Shirley or someone stepped in and told good ol’ Steve to rein it in just a little bit.

Senjutsu is another ambitious slice of music from the heavy metal legends. If you haven’t been a fan of the records since Bruce’s comeback then you still won’t be, but if you have loved what the band has been doing then you will certainly love this. There are moments of true, Maiden greatness and also frustration where editing needs to happen. Overall, it’s a solid addition to the Maiden canon and hearing these songs live (whenever that will be) will be a treat!