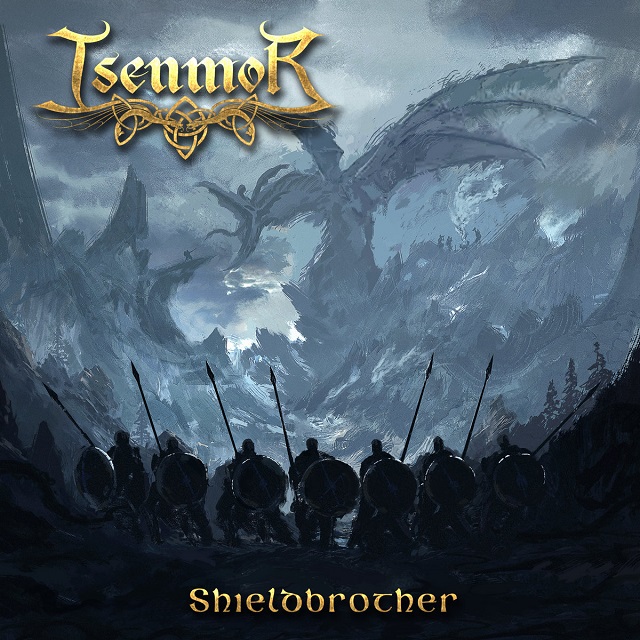 In a genre dominated by countries residing in the Nordic regions, here comes folk/Viking metal squad Isenmor from Baltimore, Maryland. Taking cues from the “E” elites like Ensiferum, Eluveitie, and Elvenking, Isenmor hangs on their hat on a dual-violin attack to entice listeners and that strength also happens to be a hindrance to their full-length debut, Shieldbrother.

The violins are the star of the show and Isenmor makes sure to showcase them. The guitars are kept to a sturdy rhythm, but remain in the background as the violins dominate the sound. If the guitars were able to intertwine with the violins in a more efficient manner, then this would be a real winner. Vocals tread on that melodeath line similar to Wintersun’s Jari and Children Of Bodom’s Alexi Laiho while also mixing in some clean choruses. Keeping the songwriting to a healthy, aggressive approach, opener “Battle Scarred” runs at a ferocious pace, while “Kings Of The Cold Mountains” does a great job showing a smoldering violin attack and displays some of that interplay between guitar-violin. There’s a moody, atmospheric, and dreamy track with “Mount Badon” that is done with elegance, grace, and would fit in with video games like Skyrim and The Witcher. And of course, there’s the rapid, drunken, fun song in “Drink To Glory”, which is a speedy romp that the violins lead at an impressively frenetic pace.

The album moves along nicely and then the 17-minute, mountainous closer in “Sigurd’s Song”, marches in and features a variety of tempo and mood changes, some nice, melodic, lead guitar work, and proves to be a well-done epic. It’s tough to find brilliant originality in folk metal, but Isenmor may be on to something. Would like to see the guitars more pronounced in the next effort, but for now, a solid start and a band to keep an eye on.