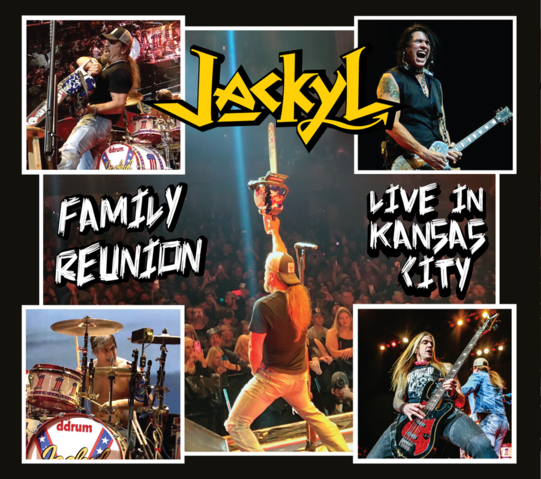 Filmed pre-pandemic in December 2019 at The Midland Theatre in Kansas City, Family Reunion is Jackyl rockin’ and rollin’ through a 17-song setlist. Frontman Jesse James Dupree, decked out in beat-up blue jeans and a black t-shirt, is the consummate frontman. Full of conviction, Jesse connects with the audience throughout an undeniably authentic performance; this is certainly not scripted. The rest of the band, brothers Worley – Jeff on guitar and Chris on drums, along with bassist Roman Glick, are locked and loaded, although that song isn’t actually played.

Starting ever so appropriately with “Blast Off” from their most recent album Rowyco, it doesn’t take long for Dupree to regale the sold-out venue with storytelling time. After a handful of tunes, Jesse straps on his guitar for “Down On Me” from Jackyl’s self-titled, platinum-certified debut album. Mid-concert, the tempo is lowered with drinking faves, “Just Because I’m Drunk (Don’t Mean You’re Right)” and “Secret Of The Bottle”. When Jackyl tears into “I Stand Alone”, the crowd regains all their previous energy, and more! A welcome surprise comes in the form of Darryl DMC McDaniels from Run-D.M.C. as he joins Jackyl on stage for two songs, “Just Like A Negro” and “It’s Tricky”. Of course, the evening ends as expected with Jesse wielding his chainsaw for the one-two punch of “Cut The Crap” and “The Lumberjack”.

A giant video screen is situated behind the drums, ensuring all in attendance get to see everything that’s going on. Somewhat surprisingly, nothing is aired from 2002’s Relentless album. And unfortunately, there’s no behind the scenes footage, bonus material, or interviews to be found on this DVD. But given the lack of live music due to COVID-19 restrictions, Family Reunion is one terrific party in the comfort and safety of your own home.