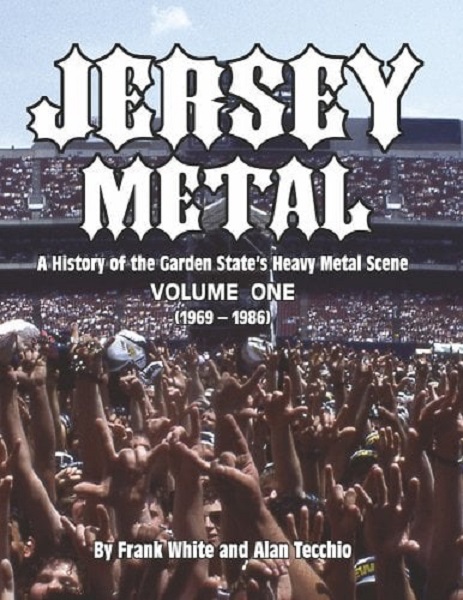 As a fellow New Jersey native, what a great idea, perfect actually, a photographer and musician working together to give a history of music in their home state. This is literally a firsthand telling from the photo pit, on the stage, backstage, the tour bus, to the streets from the fans who loved and supported this music and made it such a success worldwide. Jersey Metal: Volume One is photographer Frank White with singer Alan Tecchio (Hades, Non-Fiction) telling the story, and their stories year by year, through memories, experiences, those who were there, and pictures of New Jersey's contributions to hard rock and heavy metal music.

And not just the band's that came from New Jersey like Twisted Sister who got their start here, Bon Jovi, Skid Row,  Attacker, Ted Poley and the bands he was in pre-Danger Danger, and Overkill but everyone and anyone who played the clubs, theaters and arenas. If it is not captured in live photos from the concerts, the band names appears in ads from the local newspapers like the Aquarian weekly. There is even ads and pictures from Metallica's first east coast tour in 1983 presented by Johnny and Marsha Zazula's store Rock n Roll Heaven, and the couple's record label Megaforce.

After a preface from Jay Jay French (Twisted Sister), and Frank White, we get a brief overview of 1969 through words and newspaper ads. The ‘70s get in more depth with the history and photos of cover band Gabriel, and the very glammy New York Dolls fashion influenced beginnings of Twisted Sister in 1973. Yes, they have been around that long, see the documentary "We Are Twisted F...ing Sister!". Pictures of KISS at The Sunshine in 1974 along with Queen and Peter Frampton. White's journey as a photographer starts in 1975 at 12-years-old and pictures of Led Zeppelin at Madison Square Garden in 1975. Amazing. He saw Alice Cooper also in ’75 where he recounts the events.

Alan Tecchio starts to tell his story and share memories half way through the book. By 1983 is the first mention of the cover band at the time, Hades, which he would end up singing for a couple years later. He recalls the venues he played like the China Club and how Hades held the attendance record until Trixter came along. Yup, they had been around that long even though the debut album came out in 1990. Hades also included guitarist Dan Lorenzo who would later go on to be bandmates with Tecchio in Non-Fiction. Looking forward to hearing more about both bands in the next volume.

The book even includes the beginnings of local band Xenon in 1982 who I remember were always played on Seton Hall's Pirate Radio WSOU. The radio station started playing hard rock and metal in the mid-80s. Thrash legends Overkill also had their start in 1982, and the photos are great with the band wearing dark guy-liner in black leather, complete with candelabra, spider webs and skull props. Savatage’s appearance at WSOU and playing at the China Club in 1986 are here. Everyone and anyone who played in the NJ at the time, connections from band members going to other bands, are talked about in this book. And pictures taken either from White, or someone else. Maiden, Priest, Sabbath, Ozzy, Dio, Cinderella, Ratt and many more. Looking forward to Volume Two 1987-2004.