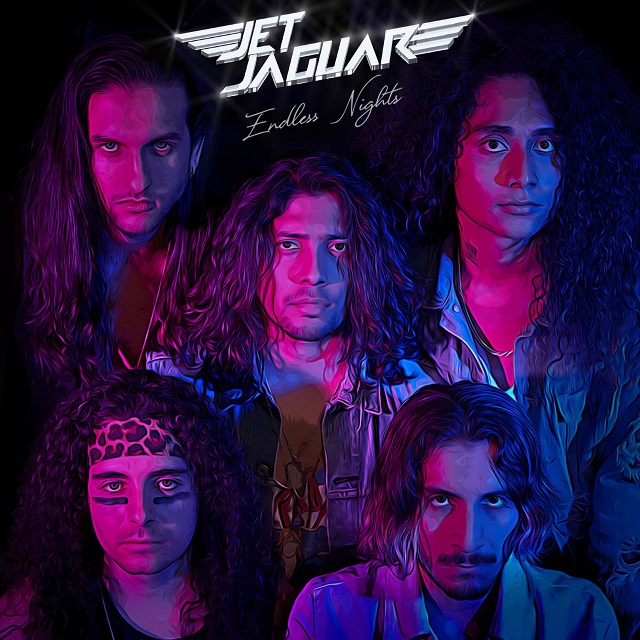 Formed in '14, this is the debut full-length from Cancun, Mexico five piece, who won the Wacken Battle (i.e., picked as best, from all the international entries, at the fest) in '17. While a demo was released through Thai "label" and issued a five song EP (Zero Hour), prior to the onstage victory, in Germany, Jet Jaguar will be a new name to most. Although there's some minor musical similarities to the name-checked Striker and Skullfist, there's also a heavy dose of Sunset Strip era within the ten songs (see cowbell accompanied "Mr. Lee", "Blinding Lights" or pedestrian, acoustic begun "No Surrender").

That said, the band references much heavier acts and mentions shredding, while only blistering "Final Prayers" and the piercing vocal heights of "R.O.D. (Race Or Die)", living up to its name, coming close to the erroneous speed metal tag some on the Internet have mislabeled Jet Jaguar. The high pitched, nasal vocals of Maxx Mendoza are an acquired taste, right from the spirited "Jet Ranger" opener. Think ‘80s Vince Neil on helium! Saccharine hair metal anthem "Tormenta" is the first of two inclusions sung in Spanish ("Nunca Mas" appearing next-to-last, in the running order, is the other). Speaking of the 6:05, largely instrumental "10,000 Years" finale, it encompasses influences from all over, including acoustic mid-section, black metal swirl, gritty guitars and almost Celtic lilt. Guess all the tourist traffic does rub off!