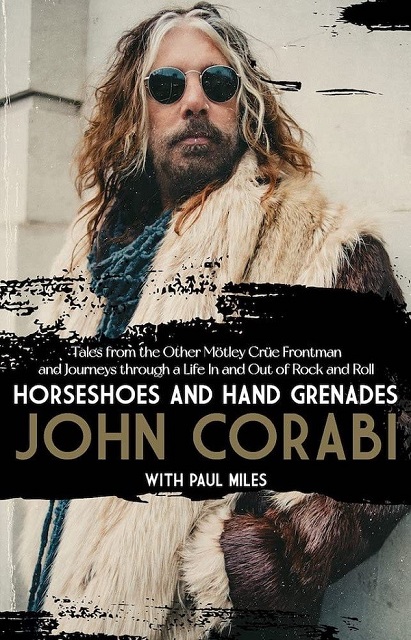 “When Mötley asked me to audition, I never thought I would actually get the gig… my whole time in Mötley was just surreal. I was just some kid from Philly freaking out on a daily basis!” says John Corabi – who replaced Vince Neil as the singer of Mötley Crüe from 1992 to 1996 – in his new autobiography, Horseshoes And Hand Grenades.

Co-authored by Paul Miles, who runs the Australian based website Chronological Crue, Horseshoes And Hand Grenades is an enjoyable and eye-raising 448-page hardcover book, chock full of amusing anecdotes and alluring insider stories. Like a lot of boys his age in the 1960s, John Corabi fell in love with The Beatles and learned to play guitar; but that’s where the parallels end. A disturbingly dark family history of abuse (which would result in the Crüe song “Uncle Jack” many years later), brushes with the law, a close call with a serial killer, and it’s glaringly obvious that Corabi did not experience an average upbringing!

Utilizing his remarkable talent as a storyteller, Corabi serves up tales about his time in Angora, being asked to audition for Skid Row, The Scream, and of course Mötley Crüe – “I didn’t grasp what was about to happen. Literally, in the space of less than a week my entire f*cking world had changed. I was suddenly the singer of one of the biggest f*cking rock bands in the entire f*cking world!” After the release of the self-titled album and Quaternary EP, Corabi was shown the door to make way for Vince Neil’s return. John went on to form Union with ex-KISS guitarist Bruce Kulick – “We both had things to say about our relationships with our women, our bands, and people we felt just did us wrong.” From there, Corabi was asked to sing for Ratt, a position John declined, but he did join the group on guitar – “I’ve never been in a band that f*cking argued between themselves so much.”

Unflinchingly honest, Corabi recalls, “There I sat in my 40s, with kids, still struggling, so I asked myself if I wanted to keep doing this rock and roll shit for the rest of my f*cking life?” At this point, Corabi enrolled in truck-driving school and began hauling 18-wheelers across The United States. Moving from Los Angeles to Nashville proved pivotal in Corabi’s return to music. After an initial “Thanks, but no thanks,” Corabi becomes the new frontman of The Dead Daisies – a move resulting in whirlwind trips around the globe. Ultimately it was that “crazy, grueling pace” which caused John to walk away after a four-year tour of duty. In closing, Corabi admits, “I made a ton of mistakes along the way. I married three times, had kids, ugly divorces, and been in way more bands than I ever wanted to be in… but that’s been my path.” And what a trailblazing path it is!