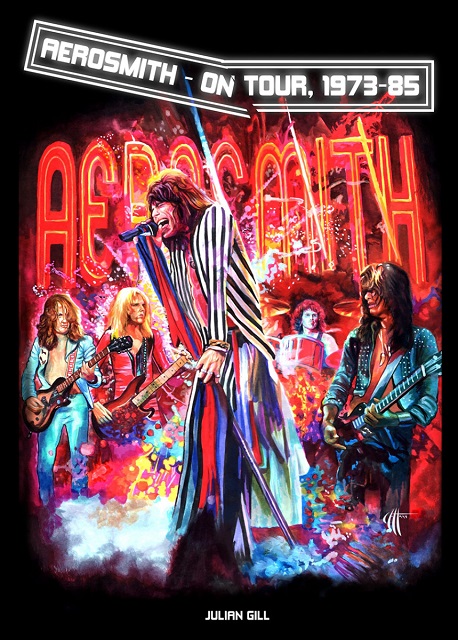 A stunning work of scholarship, this book features 612 large-format, black-and-white pages stuffed with research about every show Aerosmith played during this time, including, variously, as it was available, attendance figures, names of promoters, support (or headlining) acts, venue details, set lists, reviews in newspapers, eye-witness accounts, even tour grosses.

Now, even though this is the lion’s share of the book and it’s the least interesting part of the book, given the massive volume of the thing, there is huge value to what remains. This fits into four categories. First there’s the live photography. Although these shots are few and far between, it adds up over 612 pages! Plus given the 11 1/2” x 8 ¾” page size, routinely, there are a pile on one page and they are printed clearly. Second, there’s what seems like a few hundred gig ads and record ads, and at the more valuable end of that, the record ads, there a bunch I’ve never seen. Third, the book kicks off with a meticulous, granular history of the band—again, the scholarship that went into this is stunning.

Most valuable of all, however, there are detailed sections stuffed with factoids an’ trivia on each album, including the side-projects, like Joe Perry Project and Whitford St. Holmes. I learned tons, and again, these sections seem few and far between, but it adds up to many, many cherished, yummy, hardcore pages over a book that is 1 ½ inches thick. All told, it’s the perfect companion to the well-regarded Walk This Way oral history done by the band.

Like I say—and maybe this is just me, but maybe it’s you too—I don’t get a lot of value out of reading gig reviews, especially given that the writers from these local newspapers are usually no experts. Scratch that—it barely matters if they are or not: it’s a damn concert. So yes, there’s that. But the rest… the incredible amount of work to make this is more than admirable.