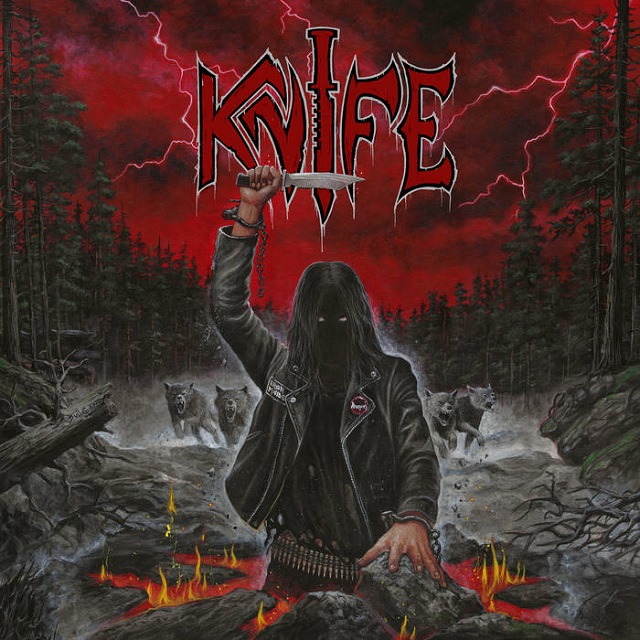 German newcomers have issued a two-song cassette (kid up not!) and four song EP, but this is the full-length debut, although four of the aforementioned are reprised here. Everything about it, from the long haired, leather jacketed protagonist wielding their namesake blade, on the cover, to the rudimentary mix of barking delivered, punk fueled speed metal screams (operative word!) ‘80s. Make no mistake, this is not one for fans of technical prowess, but rather raw emotional impact: and loud, blazing thrash! Actually, the promo literature name-checks a couple of legitimate comparisons, namely early components of countrymen Kreator, but more surprisingly, the uncompromising, yet melodic W.A.S.P. debut (especially "On Your Knees", "Helion" or "Show No Mercy", the B-side of that infamous, profanity-laden pre-release single, which Capitol refused to include on the full-length). While not referenced, add a dose of caustic Algy Ward era Tank to the combustible concoction, while we're at it.

Like impending doom, can hear the destruction building, as "Behold The Horse of War" starts, instrumentally. Once the lyrics come spitting forth, the music has already served notice, hammering into the metalhead subconscious, saying, "Yes! Hope the rest of the disc is like this!" For the most part, it proves to be, a couple of more refined moments, excepted. Fanatical, ranting preacher soliloquy greets over revving "Inside The Electric Church", one of only two tracks eclipsing four minutes. Most are 3:00, or less.

The raspy, shouted vocal performance is different, but the aggro "Black Leather Hounds", the individual letters spelled out in "K.N.I.F.E." and "Demon Wind (the longest cut at 4:10) all ride a similar vibe/groove, with over-the-top guitar, as those early Blackie Lawless recordings. Delivered at a breakneck pace, "I Am The Priest", is superseded by "The Furnace" follow-up. "Sword Loser" is more of the same, plus a short swath of guitar soloing. After an incoherent 42 seconds of mumbling, "Possessed" (annoying voiceover and a cappella conclusion aside) finishes off this retro-flashback.