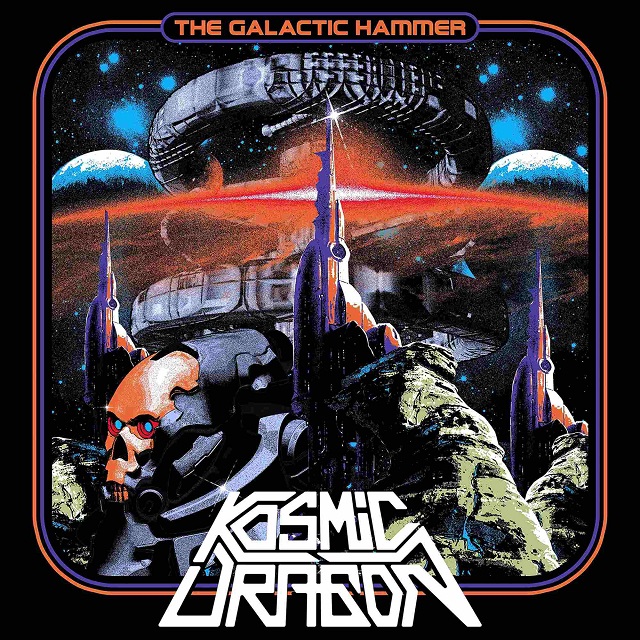 One for the sci-fi nerds, melding famous films into inspiration for synth-laden, 8-bit computer sounding power metal. They dress in matching "uniforms" (complete with KD insignia) and are fond of blasters/phasers, light sabers and other cos-play props. As a sextet, unlike other bands, they don't dispense with a second guitar, in favor of the keys. Both are present. The most surprising aspect is the strikingly smooth, virtually spoken word delivery of singer Izzy Mortus, although occasionally he does attempt to hit the outer reaches of the vocal galaxy (and, as with pre-release single "Cosmic Rings", allow a gruff counterpoint voice, alongside him).

The "Welcome Aboard" intro sets up the premise: the Kosmic Dragon is a spaceship (Disney-like amusement ride/time machine), as a voice-over explains the rules, parameters and expectations. That is, until a usurping Kraftwerk-inspired ("Autobahn") modulated vox alters course, sending the listener on an unintended journey.

Sole electric organ/piano types out an almost Celtic jig, to greet "Astral War", which shape shifts into galloping triplet headbanger, albeit with wayward swaths of synth spinning (seemingly) out of control, throughout. In the last third of the running order, the rock/metal thread unwinds, replaced by spacey New Age. Chaotic and confusing, "Guardians Of Bjorl" is one that doesn't work (also an outlier, compared to its musical neighbors). "Arrival Of The Technobots" is an 85 seconds palette cleanser, featuring mechanization voice amid blips, pops, beeps and whirls, while the closing, all-synthesizer instrumental, "Timeless Spheres", is just ethereal mood music.

A different trip. Glad to go along for the ride, but unsure how many times I'll return.