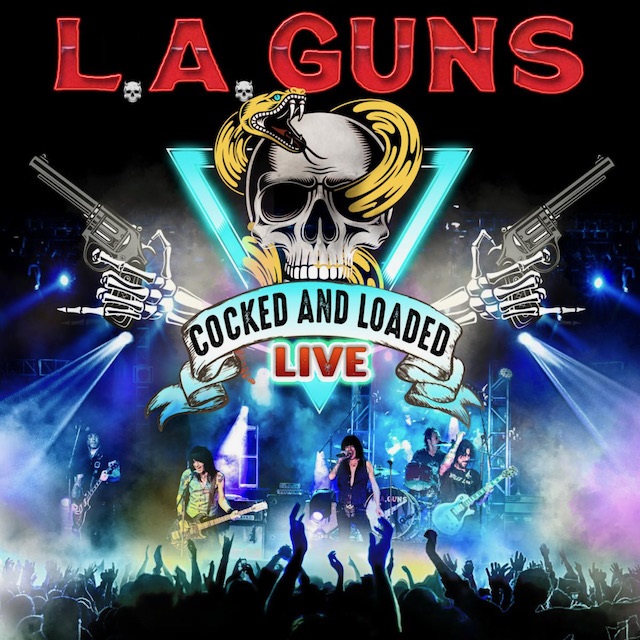 On November 28, 2020, L.A. Guns celebrated the 31st anniversary of their second album, Cocked & Loaded, by performing it live in its entirety at the Fremont Country Club in Las Vegas, Nevada. Originally aired as an exclusive pay-per-view livestream concert, the audio is now available on CD and vinyl. While only vocalist Phil Lewis and guitarist Tracii Guns remain from the 1989 lineup that released Cocked & Loaded, their current brothers in arms – guitarist Ace Von Johnson, drummer Scotty Coogan, and bassist Johnny Martin – are just as potent as the initial outfit was.

The intro track “Letting Go” has been omitted, and the festivities kick off with “Slap In The Face”. Immediately noticeable is a welcome rawness, coupled with abundant energy. Phil Lewis quickly knocks naysayers off their rocker, proving his voice is still exactly where it needs to be. After an awesome rendition of “Rip And Tear”, Lewis introduces the next song as “Never Enough”; inadvertently skipping over “Sleazy Come Easy Go”, which does get played. Kudos to L.A. Guns for leaving that oops in there, proving this truly is a live recording. “Malaria” sounds much sleazier than it did back in the day, and that’s a good thing! Up next is “Ballad Of Jayne” – talk about a timeless classic! “Magdalaine” and “Give A Little” are both deep cuts that haven’t been played live in ages; and it’s quite refreshing to have the dust blown off them. Instead of the expected “I’m Addicted (Guitar Solo)”, LAG acknowledge the present and lay down a frenzied version of “Speed” from their 2017 album, The Missing Peace.

Returning to Cocked & Loaded, the backing vocals, which provide the title of “17 Crash”, are far too low in the mix. So, it’s not perfect, but it hasn’t been touched up in the studio post-show, which is definitely appreciated. “Showdown (Riot On Sunset)” exemplifies Tracii’s six-string ability in just over three minutes. “Wheels Of Fire” and “I Wanna Be Your Man” faithfully wrap up an incredibly enjoyable set. And the full-color, eight-page booklet accompanying the disc features terrific photos by Joe Schaefer. Much more than a trip down memory lane, Cocked And Loaded Live is testament to what a great band L.A. Guns was, and still is! Look for an all-new studio album, Checkered Past, this November.