LOCK UP – The Dregs Of Hades 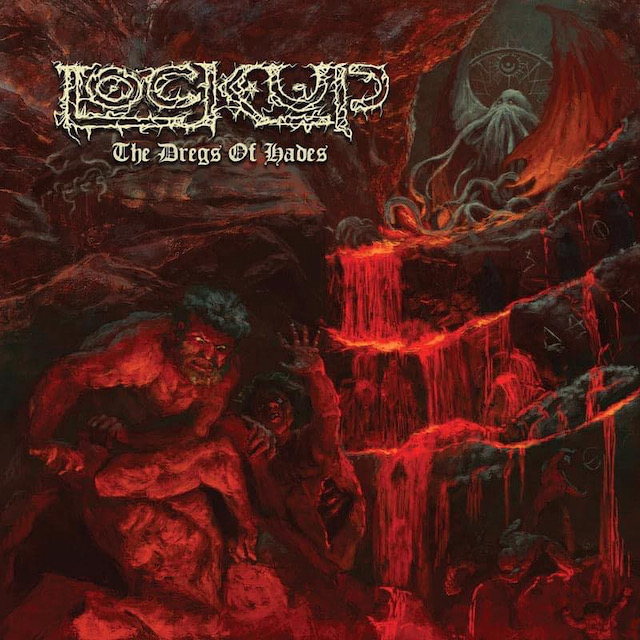 So much more than just another all-star side project, Lock Up is a superb collection of highly decorated grindcore / death metal veterans proving without a doubt that they’re still as ferocious and lethal as when they first burst onto the scene forever and a day ago. The Dregs Of Hades is the fifth studio album from Lock Up, and the first to feature two lead vocalists – Kevin Sharp (Brutal Truth, Venomous Concept) and Tomas Lindberg (At The Gates, The Lurking Fear) – who successfully volley lyrics back and forth like a grenade with the pin pulled. Although bassist Shane Embury (Napalm Death, Brujeria) is the sole remaining original member of Lock Up, guitarist Anton Reisenegger (Criminal, Pentagram) has been with the band since 2006, and newly recruited drummer Adam Jarvis (Misery Index, Pig Destroyer) is a whirlwind force of damage and destruction.

After the haunting, cinematic intro “Death Itself, Brother Of Sleep”, Lock Up unleash on 13 truly combative songs, beginning with “Hell Will Plague The Ruins” – an extraordinary welcome back after the four-year gap since Lock Up’s last album, Demonization, was released in 2017. Taking it back to where it all began, original Lock Up vocalist Peter Tägtgren (Hypocrisy, Pain) lends his voice to the chorus of the title track. “Dark Force Of Conviction” harnesses chaos, creating an equally gritty and grimy number. “Nameless Death” is a brief but blistering blast beat affair. “Dead Legions” is thunderous and timeless, bound to provide both old-schoolers and newcomers with equal delight. “Triumph Of The Grotesque” is an exercise in glorious brutality. Personal favorite “A Sinful Life Of Power” decimates with its sheer heaviness. Much like an erupting volcano, “Ashes” cannot be contained. Unlike a lot of the new extreme bands today who just play fast and scream loud, Lock Up masterfully inject groove and volatility into layers of varied density.  And album closer, “Crucifixion Of Distorted Existence”, is unlike anything that came before it; a doomy, Herculean, epic finale.