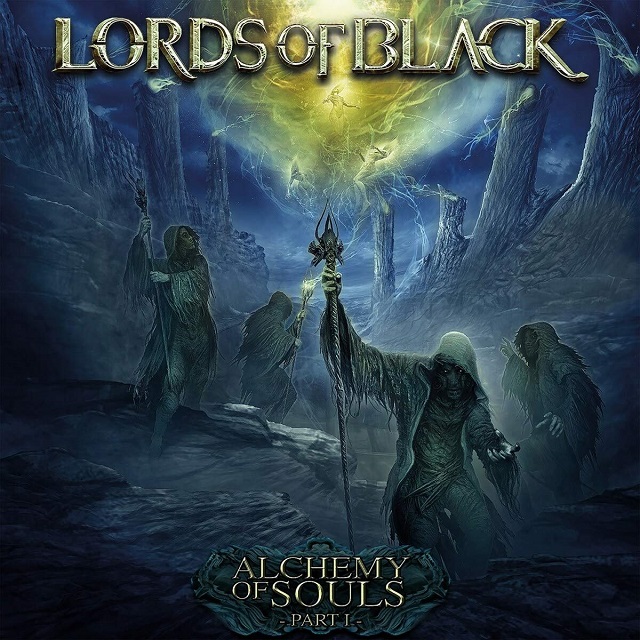 While freelancing in several other projects (most notably Ritchie Blackmore, for Rainbow), vocalist Ronnie Romero has returned to the Spanish power metallers who initially thrust him to fame, Lords Of Black. No mere one-man-band, the Lords of this new church include stringbender Tony Hernando, a talent I've been lucky enough to witness, firsthand. While Blackmore's henchman is the calling card, Hernando is the ace in the pack, a jack of all trades, musically, and onstage, a guitar king in waiting.

The Lords come blaring out of the speakers, with surefire "Dying To Live Again", yet retaining a memorable, sing-along chorus. Unlike so many of the new-generation, so-called power metal acts these days, the men in Black retain a strong/direct connection to traditional metal sensibilities (in a large part thanks to Hernando's ear). That said, a poppy, synth melody kicks off "Into The Black", although the guitarist still gets his opportunity to shine. A drum fill opens the frenetic-begun, staccato riffing/fist thruster "Deliverance Lost", while "Sacrifice" is a synth heavy stab at a hit single. Much closer to the material within the aforementioned, over-crowded field.

As with many albums (especially those boasting eleven or more ingredients), a few less might actually sweeten the pot, overall. In that regard, "Brightest Star" is the requisite gritty semi-ballad. "Closer To Your Fall" temporarily rights the ship, before the tinkling of piano ivories (falsely) gives the impression of another lame cut. Thankfully not, as the keys are left in the rearview mirror for the rest of punchy "Shadows Kill Twice". Adopting a heavier approach, "Disease In Disguise" sees Romero adding a hoarse (almost Jorn Lande) edge to his voice. Slow, bluesy and bass rumbling, "Tides Of Blood" is atypical, as a ‘70s hard rock vibe abounds. At #10 in the running order is the titular tune, begun with an extended section of Hernando's fingers picking and sliding across acoustic strings. The mid-tempo, gritty first half is separated from its more spirited conclusion by a brief segment of re-introduced piano and Romero's nearly a cappella voice. It fades out with Hernando going sick on the fretboard and Romero wailing away. Disc closing ballad "You Came To Me" is subtitled "piano version," with the Japanese getting an additional guitar rendition, as a bonus. It's a throwaway in either case. Good move tucking it at the end.