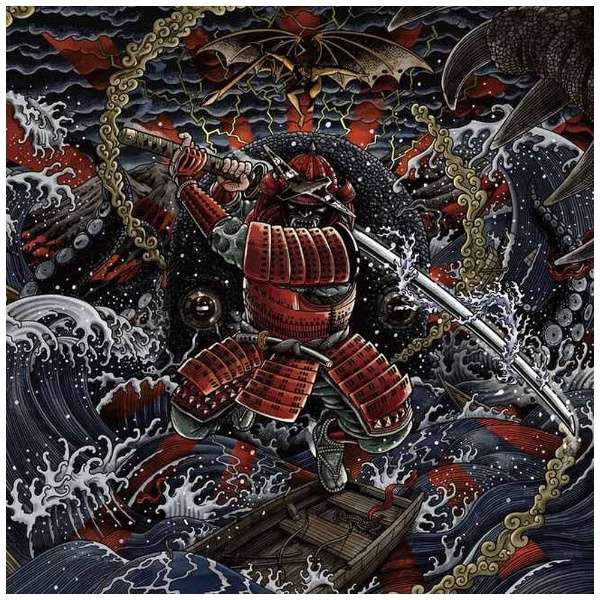 Two-disc studio effort, of all new music, from the venerable Japanese metal masters: 18 songs, evenly split, with six of them sporting titles in their native tongue. That's not to say that the English language choices are also sung in the same, as generally, that is NOT the case! In that regards, this album feels a bit like rarer, albeit often superior material, that predates the anglicized, Thunder In The East breakthrough. There are plans for an eventual North American release. Should be interesting to see how much of this remains intact.

Disc One begins with "Rising Sun" instrumental, before the otherwise mid-tempo "OEOEO" gives guitarist Akira Takasaki a chance to work through his scales. Like the old days, the Japanese language "Yamato Damashii" (meaning values of Japanese culture, it's soul, as translated from kanji) shows more aggression, both in terms of structure and vocalist Minoru Niihara's approach, feeling more comfortable in his own tongue. "Virtual Reality" is likewise in Nippon, a bit staccato, sing-song, in structure. There's the latest entry in the so-called "crazy" repertoire, ("Crazy Doctor", "Crazy Nights", "Crazy Go-Go", "Crazy Samurai", "Crazy! Crazy! Crazy!"), aka the speedy crunch of "Crazy World", which despite the western title, does not appear to be sung in English. It temporarily descends into s slow, skanking pop-blues section (with repeated enunciation of the title) that ultimately fades out to Takasaki burning up the fretboard. In contrast, "Stand Or Fall" begins acoustically, augmented by music box chimes, before lumbering into a Dio-era Black Sabbath riff, although with symphonic strings accompaniment. Meandering, bluesy ballad "The Sanzu River" gradual builds to a plodding stomp, with Niihara opting for a new/sinister tonality that sounds remarkably like the snarling shriek of Udo Dirkschneider (U.D.O./ex-Accept). The initial outing closes with another fast, aggro number, "Japanese Heart".

A trio of kanji monikers kicks of Disc Two, beginning with "Shining 80s". Initially a drum/cymbal workout, Takasaki turns the knob on his guitar in an Eddie Van Halen style. Gang vocals, practically throughout, guess (given the title) this is their throwback homage to the MTV era albums. "Emerald Sea" follow-up is a safe, if unremarkable, mid-paced rocker. Syncopated electronic effect starts otherwise commercial pop of "Door To Heaven". Get sort of a Mr. Big vibe, which isn't that surprising since they were, ahem, big, in Japan. Back to the subdued pacing for "All Will Be Fine With You", with just the titular chorus departing from the native language delivery. A staccato riffing rocker, "Fire In The Sky" is gritty, especially Niihara's emphasis. Then there's the fiery fingering mid-section, courtesy of Akira. Drum happy "Hunger For More" sees the guitarist laying down sweeps and spirited runs aplenty, while "The Nakigara" moves to a lilting gallop, apart from a chaotic cacophonous middle. Ends with sustained Niihara a cappella note. "Wonderland" finale is an ethereal mish-mash, complete with both acoustic and electric guitars, a flashback to the off-kilter psychedelia of mid-to-late ‘90s Loudness.

Not sure the extensive stylistic palette, dominated (almost exclusively) by non-English lyrics, will translate to North American tastes. Prove me wrong.