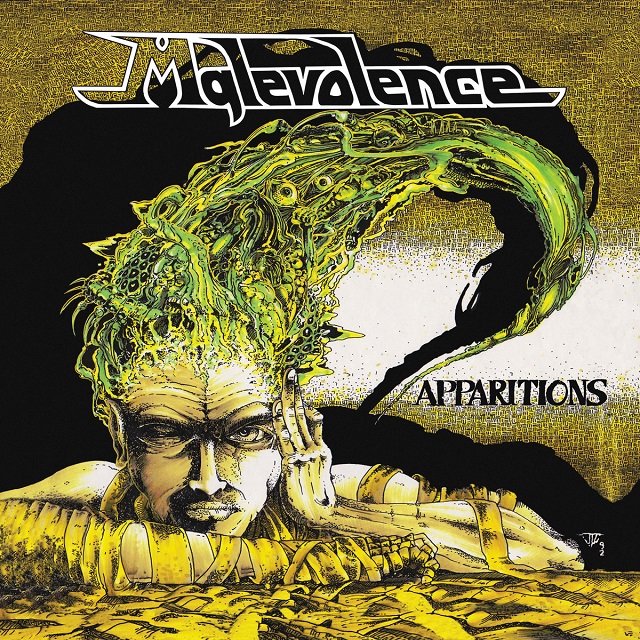 Victoria, BC-based thrashers Malevolence had a brief moment in the Canadian indie metal spotlight back in the early to mid-90s (the splash sticker here has a glowing quote from Drew Masters of M.E.A.T. Magazine), and this LP reissue of two of their cassette EPs (Apparitions and Race To Infinity, itself a re-recorded version of the demo of the same name, confusingly) shows why. The band recorded all these songs in one session in '92 at Fiasco Brothers studio, so the decision to release them as one body of work here instead of two shorter releases makes sense, and it works as an LP.

Like all Supreme Echo releases, the sound here is fantastic: the open grooves on leadoff cut “Mind's Eye”, for example, are huge, as is that song's double bass and general sense of cold Bay Area steel. “Cross Creation” flirts with both slower atmosphere and fast blasting before the band settles into their comfort zone, which screams Forbidden, Exodus, side B Ride The Lightning, maybe a touch of Xentrix, just this mean median of heartless thrash, not a lot of melody in sight, the band instead focusing on keeping things heavy but smart, generally mid-paced but not afraid to get frantic when they need to (parts of “Sleepwalk”) and with a bit of technical flair (see “Bio Hazard”). “Last Alliance”, meanwhile, showcases some great songwriting, with hooks and a great sense of build and climax. This works as both a great archival piece—the booklet is full of fun pics, gig flyers, and a band history—and a killer thrash record, one that could easily hold its own with the thrash revival bands of the past decade.

Malevolence are the almost-got-there thrash not-quite-success story of the west coast, these songs a living reminder of how hard this band went for it, how tight they were, and, really, how well they could craft a tune, this reissue the raging piece of Canadian metal history you didn't even realize was missing from your collection.