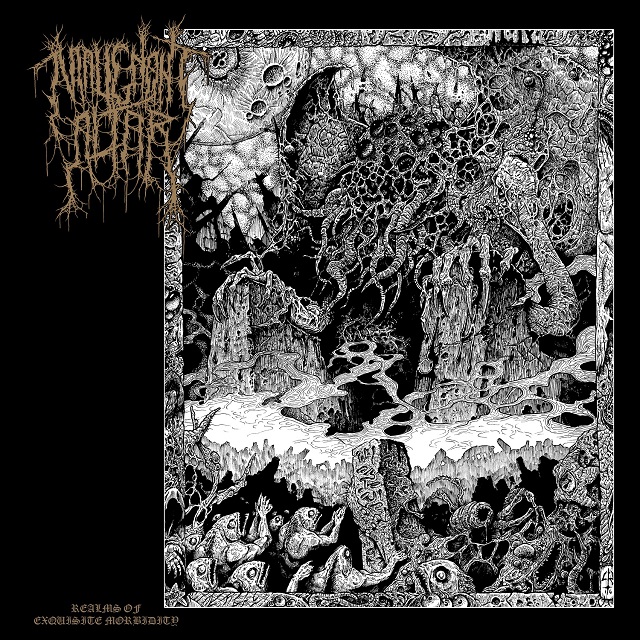 I've said it before, I'm going to keep saying it: Dark Descent is the go-to label for death metal you can trust in 2022 and beyond, and here's another great example of that, Texas DM newbies Malignant Altar's debut album, Realms Of Exquisite Morbidity.

“Channeling Impure Apparitions” gets this started so perfectly, the DM raw and cavernous but also brisk and energizing, Malignant Altar not abiding strictly by the new-school spelunkers or the old-school swamp dwellers, the band instead just loving both styles, and, hey, so do I, so this works. The song takes its time at six minutes, but it doesn't waste a second of it, even the solo part being endlessly enjoyable; when the band drop down to a sludge once the soloing stops, it's a moment to remember. I love “Usurping The Pantheon Crown”'s left-field switch from caveman sludge to batshit divebomb solo, and I also love “Ceremonial Decapitator”'s journey through painfully slow, sludging death. Perfect that this album is a mere 33 minutes in length, with 2:17 of that being the instrumental interlude title track.

Sandwiched around that are only five songs, but that's all Malignant Altar need to tell me how good they are; this album definitely would have ended up on my top albums of 2021 if it wasn't released so late in the game here, but none of that matters when the blasting, grinding, doom-laden, and very atmospheric DM that this band conjures up will be returning for many repeat listens throughout this year, and next, the absolutely perfect closing riff of “Rite Of Krasue” ringing in my ears as I await whatever this band does next.