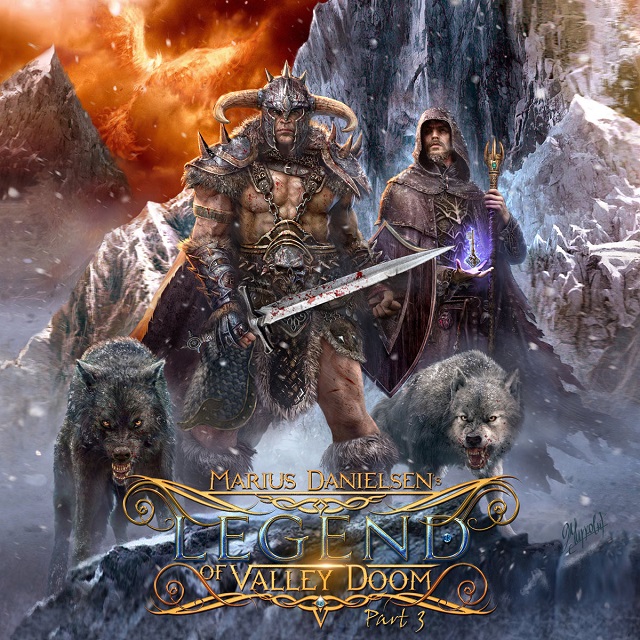 Third part of another guest-filled platter from heretofore unknown Norwegian guitarist/singer Marius Danielsen. In fact, there's a plethora of players and vocalists within the 12 tracks. Narration is handled by the actor John Rhys-Davies, best known for roles in Indiana Jones and Lord Of The Rings, while Dream Theater keyboardist Derek Sherinian adds a solo. The two dozen singers include notables Ripper Owens and Ralf Scheepers (Gamma Ray), as well as underground darlings Daniel Heiman (ex-Lost Horizon), Falconer's Matias Blad and Elisa Martin (ex-Dark Moor/ex-Fairyland). Big names adding guitar solos would be Ronni Le Tekro (TNT), Sabaton recruit Tommy Johansson, former Michael Jackson contributor Jennifer Batten and someone who also knows his way around albums with a myriad of musicians, Ayreon mastermind, Arjen Lucassen. However, while the line-up will garner some press clippings on its own, without quality music, all the effort will die a quick death. The verdict?

The story (if you couldn't tell, from the title, yes, this is a concept album: mixing the fanciful Avantasia with the realm of old Rhapsody, it concerns a perilous dwarf journey/battle) is advanced by the multi-voices relating the tale. Not so much as individualized characters (that would require greater participation than most are afforded), but the known entities are given precious few lines on which to shine, individually, as much of their effort is as part of a dual sexed choir (especially come the chorus). For instance, in the opening "Seven Ancient Artefacts" (sic), Martin is given one line by herself and in follow-up "Journey To The North", a single four line stanza, then relegated to a host of voices. The Falconer singer fares better on "The Ballad Of Arnoth The Wild". Living up to its name, apart from some neo-classical noodling, it's a slow, synth backed ballad, unlike most of the racing, over-the-top power metal constructions.

Sherinian hams it up on "Mines Of Eloroth," trading copious notes with ubiquitous guitarist Bill Hudson. The lyrics are delivered almost exclusively as a group, despite Heiman's inclusion. On the opposite end of the vocal spectrum, "Battle For Eloroth" employs a brief example of death metal intonations. "March Into The Storm" possesses a lilting power metal gallop (bit fast to be a "march") and is one of the few, true stand-alone tunes. Back-to-back eight minute offerings, to kick off the second half of the running order, is a bit pompous (but isn't it all?), at least they're both upbeat group sings ("Bane Of Lord Cremortius" and "The Sarlinian Bow", the latter utilizing Batten's emotive solo).

Lot of time and trolls have been slaughtered by hour mark! Danielsen keeps his hole cards hidden until late in game, with Scheepers (on the tenth track, of the dozen), Heiman's signature appearance, next to last and Tim "Ripper" Owens' inclusion (as part of the "all hands on deck" 9:09 finale). In fact, if not delineated, would be hard placed to pinpoint Ripper's bit, buried in a sea of likeminded sirens. "Tomb Of The Fallen Kings", with the Gamma Ray frontman, lets him strut his higher register stuff (opposite others, of course), on a speedy piece of Euro metal. Scheepers really is the vocal focal point, throughout the song, a bit of a (pleasant) anomaly, for Valley Doom. That said, there's still narrator voiceover (the artifacts returned, the assembled kings will ride into battle together). Keeping both feet on the (double bass drum) pedal, "Stars Will Light The Way (is there a hidden message in that title, given the metallic UN at Danielsen's beck n call?) is another speedster, showcasing Heiman. Damn shame all the good stuff was saved for the saga's climax. Take scissors to the storyboard and certainly would have been a more enjoyable (tolerable, still flamboyant) project.