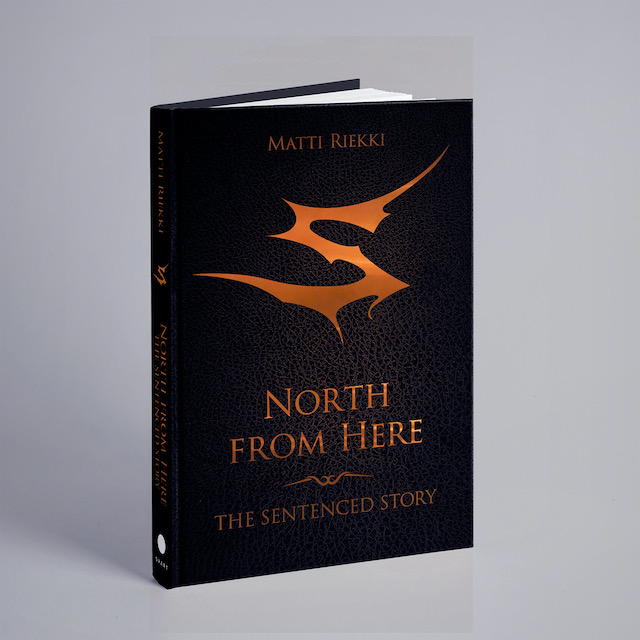 Sort of odd, writing about a band who didn't enjoy life as "rock stars", let alone partake in any extra-curricular activities. This is the first English translation of the Finns' biography (originally penned, back in 2015, in their native language, by Like Kustannus). Hats off for attempting not a verbatim transcription, but adopting Yorkshire colloquialism to (supposedly) keep the essence of the small, northern Finnish town vibe. It provides some insight into the Finnish psyche (especially the predominance of alcohol). It is not a very flattering portrayal of Taneli Jarva, who spends the initial half of the almost 250 page history being drunk and antisocial (to anyone outside his band).

Their tour manager recounts, "We picked up the guys from Berlin airport, and the first thing that caught my eye was the fact that their luggage seemed to mainly consist of beer cases. They seemed to care more about their liquor than their gear, which was practically just wrapped in plastic bags. ‘Here’s our cables, hope they work. If not, what the hey, at least there’s beer! ‘To tell you the truth they acted like drunken toddlers 24 hours a day, seven days a week.” The fourth sub-section of a chapter entitled Excuse Me While I Kill Myself, is called: The band had fun, one hour a day, on stage, and hated the rest. According to their tour manager, “They could’ve scored lots of pussy if they hadn’t been too busy with their drinking and their NHL game on the PlayStation. They just didn’t give shit."

Elsewhere the members' recollections are gilded in sarcasm, self-deprecation and a short fuse towards anything resembling praise. Speaking of positive reviews, there are none forthcoming for the litany of known names Sentenced tour with, either as support or headliner. The story is laid out chronologically, from teenagers, forming a band, each successive recording and tour (line-up changes along the way), through to the end. Dealing with depression and bouts of self-mutilation, as teens, the lyricists channel the experiences into a catalog, heavy on suicidal themes. Nearly a thousand people kill themselves in Finland, every year. In most of these cases, depression or alcohol – or both – will have had a lot to do with it.

Sadly, Until the Crimson sessions, there's not much in the way of elaboration on albums, let alone individual songs: their impetus, creation, nor band members' thoughts/remembrances. Amazing the band reached a level of international renown, as their producer confirms that even after six albums, they didn't know how to properly string, or tune a guitar! Keeping with their guarded/insular, dismissive nature, practically no one within the band has anything nice to say about their past works, nit-picking the faults, rather than dwelling on the achievements. That, in a nutshell, characterizes Sentenced.

According to the author: "The band’s deathly dark humor is crude, occasionally bordering on offensive, with high potential for misunderstandings – not that the band ever allowed itself to operate in fear of such things." "The lyrics are inappropriate as fuck, and they poke fun at well serious stuff. People will keep (killing) theirselves regardless, won’t they? And no one’s told us how many might of (killed) theirselves because of me lyrics, now, have they? We never let these people or their stories affect the way we made music, though,” Lopakka (Sami, guitarist) cracks up.

There's a candid photo spread midway through, but the last 60 pages of this retrospective (all interviews, etc. conducted since the demise of the band) surround the final album and tour, plus a two-page epilogue, discussing each musician's post-Sentenced life.