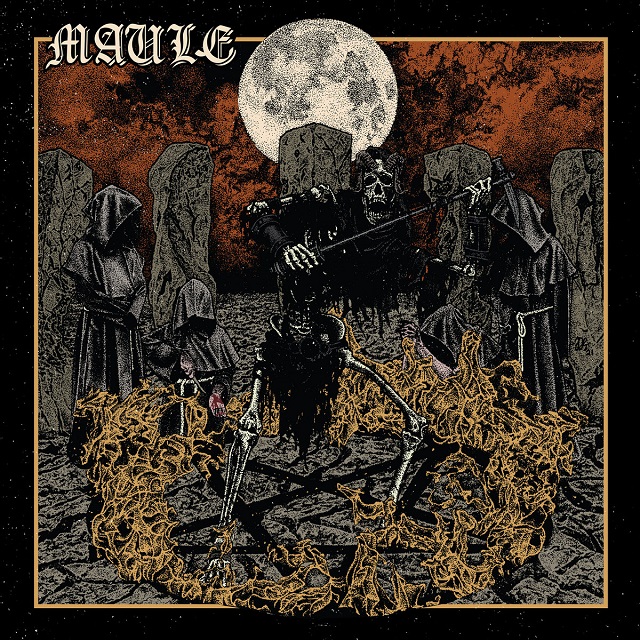 Iron Maiden fans, tired of the meandering, bloated compositions? Longing for the speed and vibrancy of the old days, when they were still struggling to break free of London's East End? Well then check out the debut from Vancouver's own Maiden enthusiasts. While these Canucknuckleheads' vocals won't be mistaken for "The Air Siren", the music is spot on ‘80s worship.

"Evil Eye" kicks things off, trumpeting a clarion call of influences in the opening bars, a sing-along, headbanging anthem: the first of many. Maule seem to recognize their gravel throated singer is the weakest link, so his time in the mix is (thankfully) minimalized, leaving the guitars plenty of time to play. With gritty, shouted lyrics, the abruptly ended "Ritual" keeps the Steve Harris tributes under wraps, until the extended guitar break. Infectious, repetitive chorus should make "Summorner" an in-concert favorite (if we ever get back to those days!). Ditto the "we pay in blood" refrain in their signature tune. Midway through, there's a temporary downshift, to a slow chug, until the lively guitar tandem returns to the racing tempo laid down earlier. Squarely in the middle of the running order, there's the full-on speed metal of "Red Sonja", but even here, there's time for a tasty six-string interlude (without any perceptible drop in tempo). Said flare actually brings the song to a close. "Sword Woman" was available as an online single, so for a teaser, check it out. Switching gears, "Father Time" marches to a belabored beat devoid of famed UK influences. "March Of The Dead" wanders in like-minded Visigoth territory, while disc closer "We Ride" begins with motorcycle sound effect, then maintains a mid-tempo NWOTHM mindset.

Not the most original sound, but certainly one that can find its niche under the vast metallic umbrella.