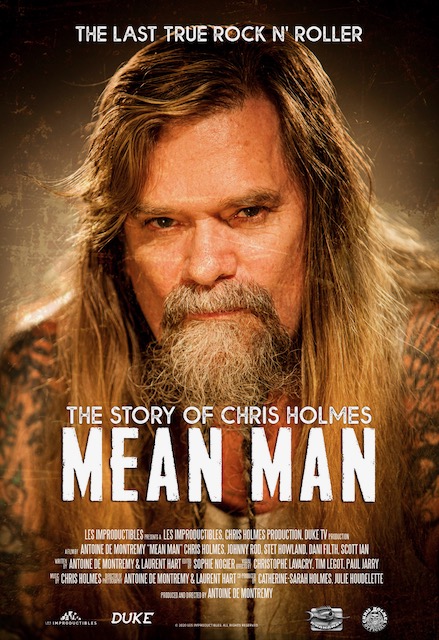 Towering guitarist Chris Holmes was an integral member of W.A.S.P. from 1983 to 1991, and again from 1996 to 2001, and this is his life story. Getting his start in Pasadena, California, the heavily tattooed six-stringer and his wife/manager now live in Cannes, France. This 80-minute documentary follows Holmes as he tours Europe, playing small clubs, and travelling in compact cars; essentially starting over. Interspersed amongst classic and current live footage are interviews with W.A.S.P. alumni Johnny Rod and Stet Howland, as well as Scott Ian (Anthrax), Dani Filth (Cradle Of Filth), Dizzy Reed (GN’R, The Dead Daisies), and Joey Vera (Armored Saint), along with friends and family members, all attesting to the fact that Chris is truly one of a kind.

Unflinchingly honest, Chris reveals, “I put up with LSD – Lead Singer Disease – all my life…  I never got a penny out of W.A.S.P., I trusted somebody who I shouldn’t have trusted… after the first album, it was the Blackie Lawless project; look who’s on the album covers.” Holmes does not shy away from voicing his bitterness and displeasure about the way he was treated in W.A.S.P. saying, “I just couldn’t take Blackie’s bullshit…he was a slave driver.” Mean Man certainly portrays W.A.S.P. mastermind Blackie Lawless in a less than flattering light. It’s not surprising that, aside from vintage clips, the singer does not make an appearance. However, Chris is certainly no angel; battling alcoholism and drug use, getting arrested, and entering into two failed marriages; one of which was to Lita Ford, who also fails to appear in the movie. As for the legendary pool scene in The Decline Of Western Civilization Part II: The Metal Years, Holmes casually comments, “To me, it was just an interview.”

Ultimately, this crazy rollercoaster ride of ups and downs is a sad story. Chris moved across the Atlantic because after departing W.A.S.P. for a second time, nobody would play with him in Los Angeles. Holmes was seen as a “has-been” in North America, yet Europeans still viewed him as a rock star. Make no mistake, Holmes does not want you to feel sorry for him. He’s now playing his music, the way he wants, under his own terms. And the Bonus Features are well worth checking out. They showcase numerous, insightful interviews that didn’t make the final cut, including details of Chris trying out for Ozzy Osbourne’s band, touring with Metallica and Iron Maiden, and his relationship with Eddie Van Halen.