MEKONG DELTA - Tales Of A Future Past 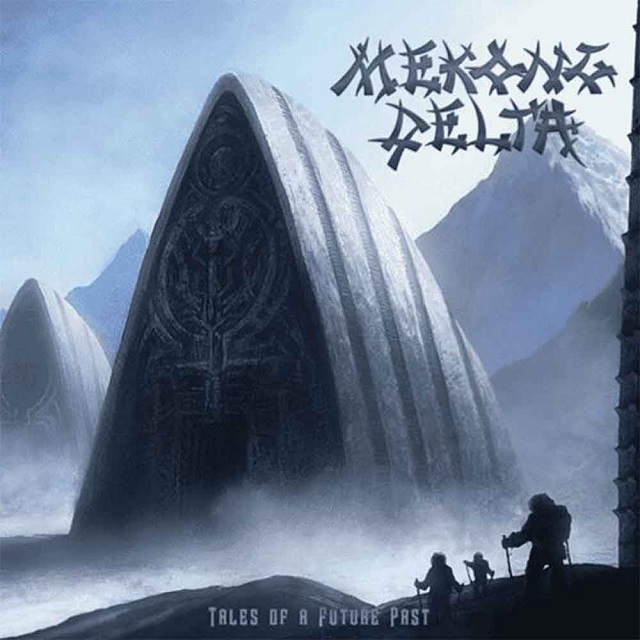 Spent much of the Nineties tracking down expensive import CDs from these musically twisted Germans. As is normally the course (a risky statement, given mastermind/bassist Ralf Herbert's proclivity for the unexpected), a high percentage (40%) of the ten inclusions are instrumentals. Each enumerated as increasing versions of "Landscape", it's not as intrusive as it sounds, since one serves as an album intro, another the final outro. Two real songs, followed by a voiceless contribution (heavier than its surroundings!), throughout the album.

Once "Mental Entropy" (is there a better euphemism for what Herbert concocts?) jumps into being, the quixotic rhythms and time signatures are instantly on display. More Watchtower schizophrenic, proto-thrash complexity than Dream Theater. Like a musical Venn diagram, with competing circular guitar patterns, never an easy listen. Instead of merely putting the disc on, in the background, as you do something else, this requires one's attention, the musicians already laying down the multi-tasking limits any human brain can endure. Following the 6:42 symphonic (brass/strings/tympani), soundtrack intermezzo "Landscape 2 - Waste Land", which includes a smattering of acoustic guitar and pizzicati harp, it's back to a more metallic "Mindeater': fairly straight forward (especially for the Mekongs), speeding riffs, a head down thrasher. Any drummer is octopus, but man, listen to the full body workout on "The Hollow Men". Subtly begun, at times "When All Hope Is Gone” (again with the orchestral strings backing) is nearly a cappella, just the low flatulent moan of bassoon (?), gradually building, as more instruments come into play. The initial verse of otherwise acoustic guitar accompanied "A Farewell To Eternity" is completely sans instrumentation. Later, they add shaken tambourine (or maraca), sort of a campfire, folk song rendition of Mekong Delta. It makes for a rough transition to closing "Landscape 4 - Pleasant Ground", which ultimately concludes with flourish of flamenco guitar and harpsichord. Sound interesting? Go ahead, have a listen. I dare ya!