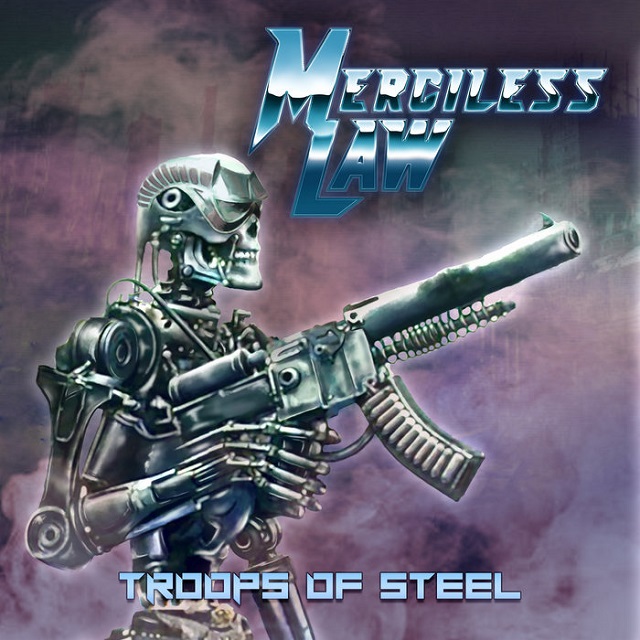 South Americans love metal and there are scores of bands trying to make the jump to international recognition/viability. Add to the list of worthy contenders this melodic thrash outfit from Chile. While the accented, high pitch (power metal) vocals might be off-putting to some North Americans, it should hold them in good stead (at home, as well as) in the global metal capitals of Europe (and, to a lesser extent, Japan). Said locales probably won't bat and eye at the English (mis)pronunciation. As Joe Perry once said, "Let the music do the talking," and the ten song debut speaks our language, acquitting itself quite well.

Currently only available as a digital download (although a limited run of physical product is in the planning stages), Troops Of Steel was produced, mixed and mastered by ubiquitous Blazon Stone mastermind Cederick Forsberg. The songs are tastefully speedy, yet infectious (not all about pace nor technique) and backed by a piercing, but enthusiastic, vocal style akin to (the late) Andre Matos, courtesy of guitarist Pancho Ireland. In fact, at this point, Merciless Law is basically his one-man band.

A great calling card, a hornets' nest buzzes around your head, as "A New Order" kicks off. Punishing drums valiantly attempt to keep pace with the fleet fingered attack. Dangerous to headbang! You've been warned. The guy really likes to give his guitar a workout, as even more even keel numbers, like "Blinded" are imbued with wildly imaginative fretwork. A call to (metallic) arms, "Wrath" delivers boatloads of notes, one after the other. "Victims Of War" absolutely hammers, slipping out of the dock, before sailing calmer seas. Still a spirited ride, white caps occasionally breaking the calm.

There's a head bobbing groove to "The Street Fighter", along with stratosphere scraping voice. The prominent guitar (there's a second track for all inclusions) adopts a different tone (more of a crunch) for "There's No Superheroes", while "World Circus" returns to the amplified ambidexterity. The finalizing, title track is subtitled "Fight For Glory". It blazes, from start-to-finish, punctuated by some of Ireland's most forceful (and as a result) highest register vocals. That said, there's a brief, slowed, technical mid-section, before the double bass drum pedals and frets re-ignite once again.

When the saints (and Troops Of Steel) go marching in. How I want to be in that number...