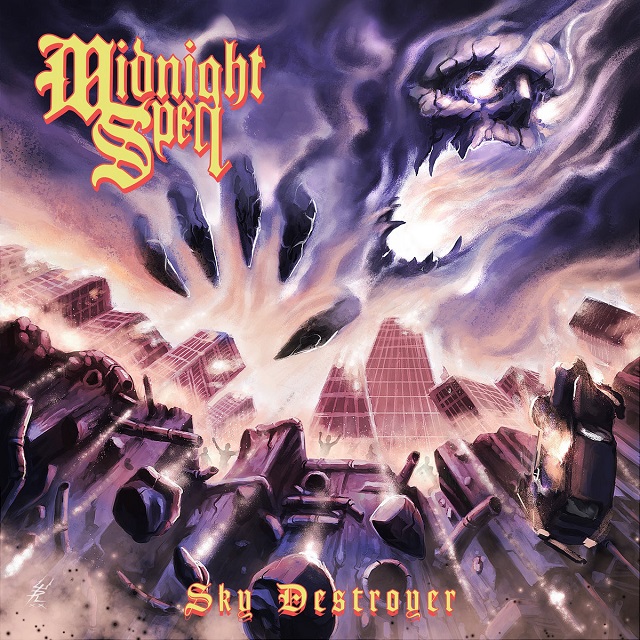 Debut from Miami based outfit, with plenty of leather, biker jackets, bullet belts and chains. High energy traditional metal, punctuated by paint-peeling, upper register vocals. A pleasant surprise, as it's rare to hear these sounds coming from North America! Reminds me of early ‘80s contributors to the Metal Massacre compilation series.

Lots of cymbal play in the opening "Blood For Blood". Gritty, heads down banger "Between The Eyes" is up next, a declaration of the band's intent (gonna make an impression via pummeling live presentation: "Maniac rockers, till the end of days"). More of a commercial edge to "Lady Of The Moonlight". Talk about your unrequited love! Getting the adrenaline flowing again, "Midnight Ride", a tale of evading the cops, also sees Paolo Velazquez punctuate with some falsetto.

Dead in the middle of the nine cuts comes the full-length (4:33) "Mercy" instrumental. Drums (courtesy of Brian Wilson...NO! not that Brian Wilson, but this much younger pup, who is a part of Yngwie's current band and toured the States with Enforcer) kick off the title track, a speedy number where the vocals soar almost as high as the namesake aircraft. Moody, near doom, to start, "Cemetery Queen" is a slower, brooding number, but listen to Velazquez sustain on this one (when he's not delivering the spoken word portion)! In the final third, there are some twisted, dive bombing guitar runs too. "To The Stars" is mid-paced, while the closer will probably become their calling card, as much for the title, as anything else: "Headbang Til Death". An upbeat, raising in intensity, sing-along, built around the titular chorus, syncopated double bass beats ride beneath the main melody. It ends in screaming crescendo.

Know the people behind this fledgling label are die-hard metalheads. Here's hoping they can support their signees, long term.