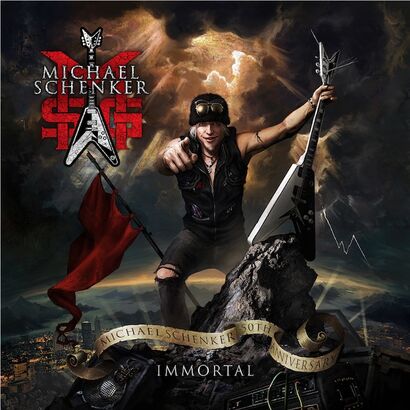 Not to be confused with his various other projects (Temple of Rock, Fest, etc.) this is a re-christening of the classic MSG brand, but rather than an actual band, it's a collection of hired hands, including a ton of guest vocalists, Ralf Scheepers (Primal Fear/ex-Gamma Ray) and Ronnie Romero (Rainbow/Lords of Black) chief among them. Oh yeah, there's also Joe Lynn Turner and original MSG alumni: Gary Barden and Robin McAuley, as well as recent collaborator Doogie White. For old-school Scorpions fans, Michael ends the album with a re-worked "In Search Of Peace of Mind" (a title that prophetically has characterized Schenker's life, and was the first song he ever wrote), which appeared on the Germans' Lonesome Crow debut, back in 1972!

The rat-a-tat of machine gun fire segues into drums, to start the speedy "Drilled To Kill" opener, where Scheepers is the star. Schenker plays it cool until the break, then goes off (and in counterpoint to the keyboards of Dream Theater's Derek Sherinian). After a typically mid-paced MSG inclusion ("Don't Die On Me Now", with Turner), Romero enlivens things on the forcefully sung "Knight Of The Dead". Released as the second single, "After The Rain" is a Beatlesque ballad, which doesn't afford the mainman any opportunity to showcase his talents. Sort of a surprise it's included on a guitarist's solo effort.

"Devil's Daughter", another fast one, is Scheepers' second bite of the apple, with the well-metered, fist-thrusting "Sail The Darkness" seeing Romero adroitly handle the Dio-inspired rocker. Hell, Ritchie Blackmore hand-picked him to do the same, in Rainbow! There's a bouncy, 60s pop/punk rhythm to "Queen Of Hearts & Roses". Romero is back, for "Come On Over", a stripper-strut slice of 80s LA hair metal, with requisite fleet-fingered solo spot. A Spaghetti Western tinged "Sangria Morte" is a different flavor, as it gallops (or maybe just trots) along. The updated version of the hypnotic, hippy Scorps classic employs more than one voice and some piano/keyboards, but is essentially an excuse for Schenker to get lost in the notes.

Sadly, apart from the odd European festival, can't see Scheepers and/or Romero being able to replicate their performances, live, so enjoy this for what it is, a studio effort.