MYSTIC STORM - From The Ancient Chaos 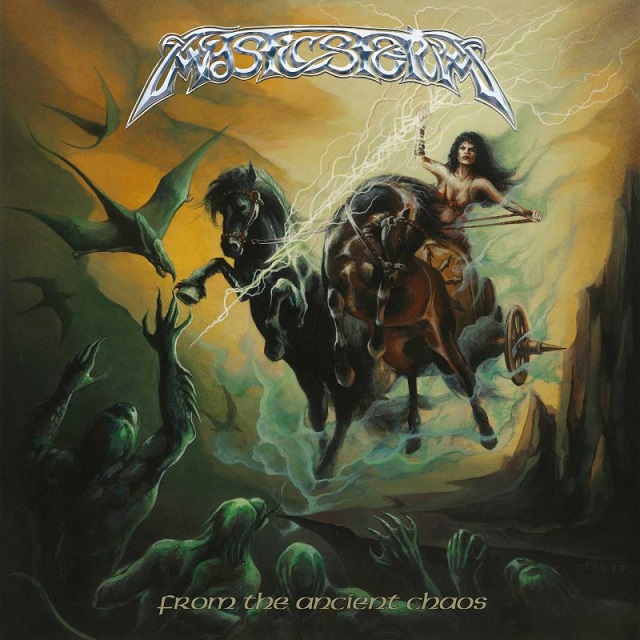 Seven song debut (closing "The End" is a mere 52 second, acoustic guitar & chimes outro) from female fronted Russian thrashers begins with a length intro, but once unleashed, it's a chaotic firestorm. Interesting that they opted to cover Detente's "Vultures In The Sky" (as a bonus track), as Anya's witchy caterwaul comes from Dawn Crosby's coven, albeit exclusively in her native language.

"Nightmares" sets the table, the atmospheric, aforementioned intro (sort of Slayer-ish, building towards the ultimate carnage/crescendo). Almost every cut has an exaggerated build-up at the start. The first half of its 6+ minute’s length is voiceless. Next up is "Clang Of Swords", for which there is a video online, complete with sound effects of sabers and cutlasses engaged in battle. No idea precisely what Anya is railing against, but definitely agonizingly convincing on the likes of abruptly ended/clunking, loose bass strings "Ritual" and twiddling guitar of "Riddle Of Steel". By contrast, "Beheaded" is nearly instrumental. Pick of the litter is "In The Throes Of Evil". Her moaning intro sounds otherworldly (to non-Russian speaking ears) and the instruments (especially pounding drums) cut a clean swathe through the hellish din: nearly mechanized riveting, with some wild guitar dive-bombs. Really cool! The last proper tune, "Along The Coasts Of Stygia" is devoid of vocals, a mix of Reign In Blood-era Slayer dynamics and symphonic music, at a plodding pace. If that's even possible.

Certainly swimming against the tide, wanting no part of being considered mainstream!